A Century of Schooling and Resistance in a Black Community 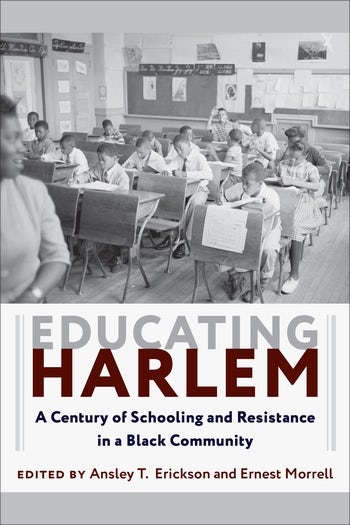 A Century of Schooling and Resistance in a Black Community

Over the course of the twentieth century, education was a key site for envisioning opportunities for African Americans, but the very schools they attended sometimes acted as obstacles to black flourishing. Educating Harlem brings together a multidisciplinary group of scholars to provide a broad consideration of the history of schooling in perhaps the nation’s most iconic black community.

The volume traces the varied ways that Harlem residents defined and pursued educational justice for their children and community despite consistent neglect and structural oppression. Contributors investigate the individuals, organizations, and initiatives that fostered educational visions, underscoring their breadth, variety, and persistence. Their essays span the century, from the Great Migration and the Harlem Renaissance through the 1970s fiscal crisis and up to the present. They tell the stories of Harlem residents from a wide variety of social positions and life experiences, from young children to expert researchers to neighborhood mothers and ambitious institution builders who imagined a dynamic array of possibilities from modest improvements to radical reshaping of their schools. Representing many disciplinary perspectives, the chapters examine a range of topics including architecture, literature, film, youth and adult organizing, employment, and city politics. Challenging the conventional rise-and-fall narratives found in many urban histories, the book tells a story of persistent struggle in each phase of the twentieth century. Educating Harlem paints a nuanced portrait of education in a storied community and brings much-needed historical context to one of the most embattled educational spaces today.

An outstanding collection of cutting-edge essays, Educating Harlem rewrites the narrative of twentieth-century urban education. Eschewing a single thesis or grand narrative, this groundbreaking volume shows the creativity, debate, fierce love, and impassioned determination of a community to make education a human right amid the ever-changing but always inequitable landscape of New York City. Martha Biondi, author of To Stand and Fight: The Struggle for Civil Rights in Postwar New York City

Read this book to understand how education has long been a source of pride and value in one of America’s most historic black communities. Read it to understand how systems of racial bias have been used to interrupt black life and threaten black lives. David Kirkland, executive director of the Metropolitan Center for Research on Equity and the Transformation of Schools at New York University

These impressive essays provide a multifaceted look at the educational battles in Harlem. Not only was Harlem a cultural mecca, it was a place of hope and frustration, of opportunity and racism. At its core were residents who disagreed on aims and tactics but remained committed to educational excellence and black equality. Joy Ann Williamson-Lott, author of Jim Crow Campus: Higher Education and the Struggle for a New Southern Social Order

Educating Harlem epitomizes the power and potential of interdisciplinary exchange and collaboration. I could not imagine a more comprehensive and impressive assembly of scholars contained in one collection. Both experienced and emerging researchers will appreciate the varied sources and disciplinary approaches contributors utilize to recover and recount one urban community's struggle to secure educational opportunity in the twentieth century. Hilary Moss, Amherst College

Educating Harlem is a comprehensive treatment that reveals the continued role of hope in shaping the activism of a community. The assembled scholars demonstrate Harlem’s ongoing efforts to use education as a tool for citizenship and socioeconomic mobility. Hilary Green, University of Alabama

Ansley T. Erickson is associate professor of history and education at Teachers College, Columbia University. She is the author of Making the Unequal Metropolis: School Desegregation and Its Limits (2016).

Ernest Morrell is the Coyle Professor in Literacy Education, director of the Center for Literacy Education, and a faculty member in the English and Africana Studies departments at the University of Notre Dame. His many books include Critical Media Pedagogy: Teaching for Achievement in City Schools (2013).