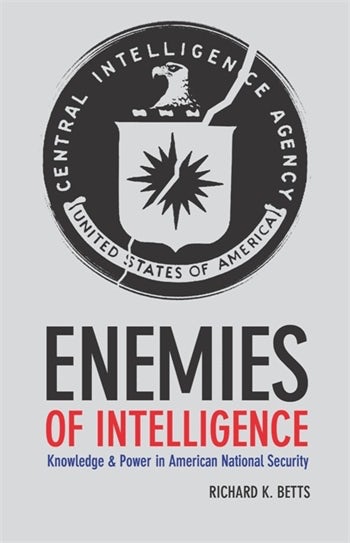 The tragic events of September 11, 2001, and the false assessment of Saddam Hussein's weapons arsenal were terrible reminders that good information is essential to national security. These failures convinced the American public that their intelligence system was broken and prompted a radical reorganization of agencies and personnel, but as Richard K. Betts argues in this book, critics and politicians have severely underestimated the obstacles to true reform.

One of the nation's foremost political scientists, Betts draws on three decades of work within the U.S. intelligence community to illuminate the paradoxes and problems that frustrate the intelligence process. Unlike America's efforts to improve its defenses against natural disasters, strengthening its strategic assessment capabilities means outwitting crafty enemies who operate beyond U.S. borders. It also requires looking within to the organizational and political dynamics of collecting information and determining its implications for policy.

Combining academic research with personal experience, Betts outlines strategies for better intelligence gathering and assessment. He describes how fixing one malfunction can create another; in what ways expertise can be both a vital tool and a source of error and misjudgment; the pitfalls of always striving for accuracy in intelligence, which in some cases can render it worthless; the danger, though unavoidable, of "politicizing" intelligence; and the issue of secrecywhen it is excessive, when it is insufficient, and how limiting privacy can in fact protect civil liberties.

Betts argues that when it comes to intelligence, citizens and politicians should focus less on consistent solutions and more on achieving a delicate balance between conflicting requirements. He also emphasizes the substantial success of the intelligence community, despite its well-publicized blunders, and highlights elements of the intelligence process that need preservation and protection. Many reformers are quick to respond to scandals and failures without detailed, historical knowledge of how the system works. Grounding his arguments in extensive theory and policy analysis, Betts takes a comprehensive and realistic look at how knowledge and power can work together to face the intelligence challenges of the twenty-first century.

Preface
1. Twenty-first-Century Intelligence: New Enemies and Old
2. Permanent Enemies: Why Intelligence Failures Are Inevitable
3. Theory Traps: Expertise as an Enemy
4. Incorruptibility or Influence? Costs and Benefits of Politicization
5. Two Faces of Failure: September 11 and Iraq's WMD
6. An Intelligence Reformation? Two Faces of Reorganization
7. Whose Knowledge of Whom? The Conflict of Secrets
8. Enemies at Bay: Successful Intelligence
Notes
Index

Richard K. Betts is director of the Arnold A. Saltzman Institute of War and Peace Studies at Columbia, senior fellow at the Council on Foreign Relations, and author of numerous books on military strategy and foreign policy. He has served on the National Commission on Terrorism, staffs of the Senate Intelligence Committee and National Security Council, and advisory panels for the Director of Central Intelligence.