Drug Courts, Therapeutic Communities, and the Intimacies of the State 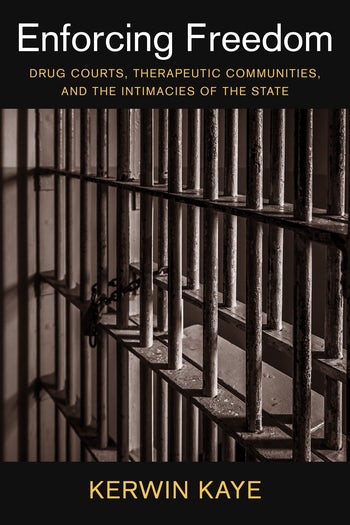 Drug Courts, Therapeutic Communities, and the Intimacies of the State

In 1989, the first drug-treatment court was established in Florida, inaugurating an era of state-supervised rehabilitation. Such courts have frequently been seen as a humane alternative to incarceration and the war on drugs. Enforcing Freedom offers an ethnographic account of drug courts and mandatory treatment centers as a system of coercion, demonstrating how the state uses notions of rehabilitation as a means of social regulation.

Situating drug courts in a long line of state projects of race and class control, Kerwin Kaye details the ways in which the violence of the state is framed as beneficial for those subjected to it. He explores how courts decide whether to release or incarcerate participants using nominally colorblind criteria that draw on racialized imagery. Rehabilitation is defined as preparation for low-wage labor and the destruction of community ties with “bad influences,” a process that turns participants against one another. At the same time, Kaye points toward the complex ways in which participants negotiate state control in relation to other forms of constraint in their lives, sometimes embracing the state’s salutary violence as a means of countering their impoverishment. Simultaneously sensitive to ethnographic detail and theoretical implications, Enforcing Freedom offers a critical perspective on the punitive side of criminal-justice reform and points toward alternative paths forward.

In Enforcing Freedom, Kaye masterfully shows how drug courts and associated therapeutic communities update concepts of cultures of poverty and biological race with contemporary idioms of addiction as brain disease and welfare dependency. Blending political and historical analysis of U.S. drug war and rehabilitation ideologies with keen ethnographic observation, this book is a must-read to understand the seduction of drug courts as a false alternative to racialized mass incarceration. Helena Hansen, author of Addicted to Christ: Remaking Men in Puerto Rican Pentecostal Drug Ministries

Kaye has written an important, insightful, and nuanced ethnographic study of urban drug courts and, more unusually, the privatized therapeutic communities upon which they rely to deliver drug treatment services. His unique examination of the arms-length relationship between these somewhat mysterious private treatment providers and the formal court system is revelatory and spot on. While he provides a highly critical analysis, Kaye also makes a number of thoughtful ‘real world’ policy recommendations that build on and flow from his findings, and that will appeal to judicial and treatment policymakers. Michael Jacobson, author of Downsizing Prisons: How to Reduce Crime and End Mass Incarceration

Kaye not only explodes the neoliberal mythology of the beneficence of drug courts and other diversion schemes but also lays bare their continuing coercive and even brutalizing potential. Supporters and skeptics of drug courts alike will find much to consider in this forceful ethnography. And all of us who are interested in envisioning a post–War on Drugs United States should seriously consider Kaye’s suggestions. Samuel Kelton Roberts Jr., author of Infectious Fear: Politics, Disease, and the Health Effects of Segregation

Acknowledgments
1. Policing Addiction in a New Era of Therapeutic Jurisprudence
2. Drug Court Paternalism and the Management of Threat
3. Today Is the First Day of the Rest of Your Life: Rehabilitative Practice Within Therapeutic Communities and the History of Synanon
4. Control and Agency in Contemporary Therapeutic Communities
5. Gender, Sexuality, and the Drugs Lifestyle
6. Retrenchment and Reform in the War on Drugs
Notes
References
Index