Critical Outsider in a Turbulent Age 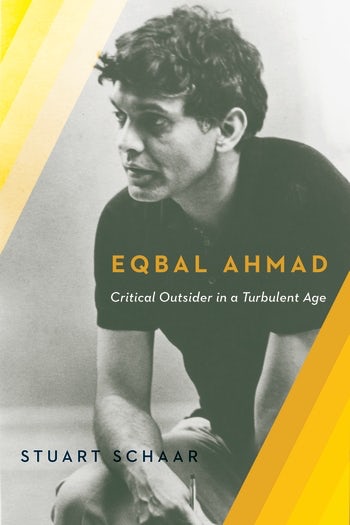 Critical Outsider in a Turbulent Age

Eqbal Ahmad (1930?–1999) was a bold and original activist, journalist, and theorist who brought uncommon perspective to the rise of militant Islam, the conflict in Kashmir, the involvement of the United States in Vietnam, and the geopolitics of the Cold War. A long-time friend and intellectual collaborator of Ahmad, Stuart Schaar presents in this book previously unseen materials by and about his colleague, having traveled through the United States, India, Pakistan, western Europe, and North Africa to connect Ahmad's experiences to the major currents of modern history.

Ahmad was the first to recognize that former ally Osama bin Laden would turn against the United States. He anticipated the rapidly shifting loyalties of terrorists and understood that overthrowing Saddam Hussein would provoke violence and sectarian strife in Iraq. Ahmad had great compassion for the victims of the proxy wars waged by the leading Cold War powers, and he frequently championed unpopular causes, such as the need to extend the rights of Palestinians and protect Bosnians and Kosovars in a disintegrating Yugoslavia. Toward the end of his life, Ahmad worked tirelessly to broker a peace between India and Pakistan and to prevent the spread of nuclear weapons throughout the subcontinent. As novel and necessary as ever, Ahmad's remarkable vision is here preserved and extended to reveal the extent to which he was involved in the political and historical conflicts of his time.

This book is full of remarkable original primary material on the life and writings of an intellectual and activist well deserving of a biography. Rashid Khalidi, Columbia University

Eqbal Ahmad was a brilliant and penetrating critic and analyst, a courageous fighter for justice and freedom in much of the world, steeped in humanistic understanding, warm and compassionate, a dear friend. His accomplishments ranged from demolishing self-serving dogmas about the Cold War to such constructive work as bringing Indians and Pakistanis together in a search for an amicable settlement of a tragic conflict, and far too much more even to try to mention. His life, achievements, and legacy are vividly portrayed by his close friend Stuart Schaar in this outstanding study, a fine tribute to one of the most remarkable people I've been fortunate enough to know, or even to know about. Noam Chomsky

Eqbal Ahmad was a remarkable human being as well as a seminal progressive political thinker. In this illuminating intellectual biography, Stuart Schaar, brings his subject to life, drawing on their long, intimate friendship and shared scholarly engagement with the politics of the Middle East and the Islamic world. Above all, Ahmad grasped the toxic interplay between the maladies of postcolonialism and the persistent imperial ambitions of the West better than any of his contemporaries. Richard A. Falk

By taking readers across the entire fascinating range of Ahmad's preoccupations and passions, Schaar has made his subject accessible to all those who never had the privilege of knowing him. In a fairly short, fluently written work, Schaar has done his old friend proud, and shed light on a thinker, an engaged activist and a wonderful man. Irfan Husain, Dawn

Schaar has done us a service in providing an introductory overview of Eqbal Ahmad's life and thought, unveiling the man's humanity, frustrations, foibles, brilliance, and even his culinary talents (an appendix provides a recipe for a "Chicken Tikka Masala Marinade"). Friday Times

Short but poignant . . . Schaar does a wonderful job capturing the special relationship and bond between Ahmad and Said. Journal of Palestine Studies

This book is essential for understanding the intellectual prowess and legacy of one of the great minds of our times. Muslim World Book Review

Stuart Schaar is professor emeritus of Middle East and North African history at Brooklyn College, CUNY. His most recent publication is The Birth of the Arab Citizen and the Changing of the Middle East. He lives in Rabat, Morocco.