Edited and translated by R. Parthasarathy 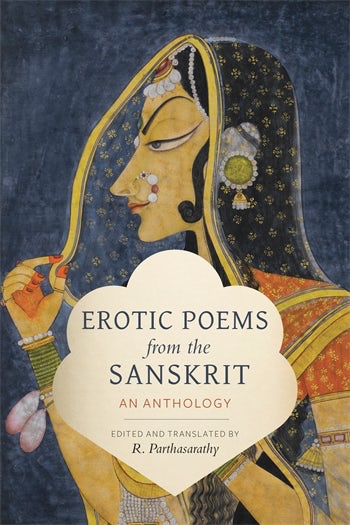 Edited and translated by R. Parthasarathy

Poet R. Parthasarathy’s Erotic Poems from the Sanskrit is a masterful work of literary art, illuminating for modern readers the spirit of eros across more than eleven centuries, transported from a language associated with the quest for enlightenment—the philosophical and literary lingua franca of ancient India and Nepal. Parthasarathy deftly preserves the polysemic richness of Sanskrit, and in his English versions we glimpse what is half-clothed, half-unseen, neither concealed nor exposed: the body’s scent, secret places, desire and the vicissitudes of stolen, illicit, and furtive love, inscribed in marks of teeth and nails on skin, gestures of surrender, a broken string of pearls scattered across a bed, water drops shaken from unkempt hair, the moment when the silk wrap comes loose. These are beautiful transcriptions of human love, at once ancient, mysterious, and contemporary, a magnificent achievement. Carolyn Forché, author of Blue Hour

Parthasarthy’s collection is admirable for making Sanskrit poetry relevant and accessible once again. . . . This slender volume is as delightful and passionate as the experience of love itself can get. Soni Wadhwa, Asian Review of Books

Acknowledgments
Introduction
Abhinanda
That’s How I Saw Her
Amaru
Who Needs the Gods?
In a Hundred Places
A Taste of Ambrosia
Pincers
The Bride
Anon
Lovers’ Quarrel
The Pledge
A Lover’s Welcome
Regret
Stonehearted
Feigning Sleep
Remorse
Walking the Street by Her House
The Sheets
A Woman Wronged
Aubade
Like the Wheels of a Chariot
The Word
An Invitation
The Traveler
The Devoted Wife
The Kingdom’s Happiness
Hair
Wild Nights
Thank Offering
At the Cremation Ground
On a Rainy Day
When Winter Comes
Jewels
The Creaking Bed
She Protests Too Much
She Doesn’t Let Go of Her Pride
The Ways of Love
A Lover’s Word
The Hawk
A Needle
Time Wasted
The Scholar’s Life
Foolish Heart
Supreme Bliss
Bāṇa
In a Corner of the Village Shrine
Bhartṛhari
Wise Men
Poets’ Excesses
The Love Game
Hips
Fear of Death
Desire Alone
Adoration of Woman
The Poet Speaks to the King
Contentment
Man’s Life
Old Age
White Flag
Bhāskara II
Elementary Arithmetic
Bhavabhūti
The Critic Scorned
Bhāvakadevī
Bitter Harvest
Bhoja
Scrambling Out of the Water
Bilhaṇa
Bite Marks
In Life After Life
All for Love
Devagupta
Drumbeats
Dharmakīrti
The Way
Jagannātha Paṇḍitarāja
Indra’s Heaven
Jaghanacapalā
Wife
Kālidāsa
Flight of the Deer
Such Innocent Moves
Blessed Sleep
Karṇotpala
The Lamp
Keśaṭa
The Camel
Kṣemendra
All Eyes on the Door
Kṣitīśa
The Red Seal
Kumāradāsa
Alba
Kuṭalā
Furtive Lovemaking
Māgha
The Art of Poetry
Scent
Mahodadhi
Stop Being Willful
Morikā
Don’t Go
Murāri
Hidden Fingernail Marks
An Actor in a Farce
Rājaputra Parpaṭi
Blow Out the Lamp
Rājaśekhara
Her Face
Rudraṭa
What the Young Wife Said to the Traveler
Śaraṇa
Girl Drawing Water from a Well
Siddhoka
The Empty Road
Śīlābhaṭṭārikā
Then and Now
Sonnoka
Driven by Passion
Śrīharṣa
The Smart Girl
In Her Direction
Vallaṇa
Sea of Shame
On the Grass
The Essence of Poetry
Varāha
Poring Over a Book
Vidyā
Hollow Pleasures
Complaint
The Riverbank
Vikaṭanitambā
The Bed
A Word of Advice
Yogeśvara
Far from Home
When the Rains Come
Notes
Sources of Poems
Bibliography
Credits
Index of Titles and First Lines
Index

R. Parthasarathy is professor emeritus of English at Skidmore College. He is the editor and translator of The Tale of an Anklet: An Epic of South India (Columbia, 1993).