What the Fossils Say and Why It Matters, second edition 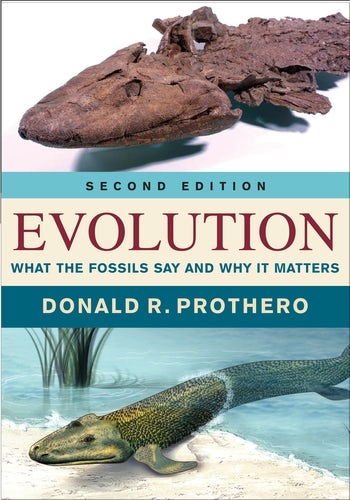 What the Fossils Say and Why It Matters, second edition

Donald R. Prothero’s Evolution is an entertaining and rigorous history of the transitional forms and series found in the fossil record. Its engaging narrative of scientific discovery and well-grounded analysis has led to the book’s widespread adoption in courses that teach the nature and value of fossil evidence for evolution. Evolution tackles systematics and cladistics, rock dating, neo-Darwinism, and macroevolution. It includes extensive coverage of the primordial soup, invertebrate transitions, the development of the backbone, the reign of the dinosaurs, and the transformation from early hominid to modern human. The book also details the many alleged “missing links” in the fossil record, including some of the most recent discoveries that flesh out the fossil timeline and the evolutionary process.

In this second edition, Prothero describes new transitional fossils from various periods, vividly depicting such bizarre creatures as the Odontochelys, or the “turtle on the half shell”; fossil snakes with legs; and the “Frogamander,” a new example of amphibian transition. Prothero’s discussion of intelligent design arguments includes more historical examples and careful examination of the “experiments” and observations that are exploited by creationists seeking to undermine sound science education. With new perspectives, Prothero reframes creationism as a case study in denialism and pseudoscience rather than a field with its own intellectual dynamism. The first edition was hailed as an exemplary exploration of the fossil evidence for evolution, and this second edition will be welcome in the libraries of scholars, teachers, and general readers who stand up for sound science in this post-truth era.

If you're one of these people who likes to read Dawkins, Gould, and Darwin, I would highly recommend this book. If you doubted that evolution was true before, and then you looked at this book, I don't see how you could possibly continue to question it. Jerry Coyne, author of Faith Versus Fact: Why Science and Religion Are Incompatible

This is a wonderful book that beautifully explains in layperson’s terms the vast evidence for evolution in the paleontological record. Its publication comes at a critical time. By concentrating the diverse scientific literature into numerous lucid examples, Donald R. Prothero does the fields of geology, biology, and science education a major service. He provides a unique source that will be invaluable to college professors and high school teachers alike, and because his book provides abundant, clearly described examples of evolution in the fossil record, and also synthesizes important information about the Bible, it will make a valuable addition to any scientist’s library. Bruce Lieberman, University of Kansas

Donald R. Prothero not only is one of the leading evolutionary scientists of our time, he also writes with clarity, and his prose sparkles. Prothero’s book is more thorough and comprehensive than any other book for the general public on the evolution versus creationism controversy. Michael Shermer, publisher of Skeptic magazine, monthly columnist for Scientific American, and author of Why Darwin Matters: The Case Against Intelligent Design

If you are interested in evolution, get this book. And make sure that your library gets it. And your children's high school library. 3 Quarks Daily

This second edition will be welcome in the libraries of scholars, teachers, and general readers who stand up for sound science in the post-truth era. Birdbooker Report

Foreword: Why People Do Not Accept Evolution
To the Reader: Is Evolution a Threat to Your Religious Beliefs?
Prologue: Fossils and Evolution
Preface to the Second Edition
Acknowledgments
Part I: Evolution and the Fossil Record
1. The Nature of Science
2. Science and Creationism
3. The Fossil Record
4. The Evolution of Evolution
5. Systematics and Evolution
Part II: Evolution? The Fossils say YES!
6. Life’s Origins
7. Cambrian “Explosion”—or Slow Fuse?
8. Spineless Wonders of Evolution
9. Fish Tales
10. Fish Out of Water
11. Onto the Land and Back to the Sea: The Amniotes
12. Dinosaurs Evolve—and Fly
13. Mammalian Explosion
14. Bossies and Blowholes
15. The Ape’s Reflection?
16. Why Does It Matter?
Bibliography
Index