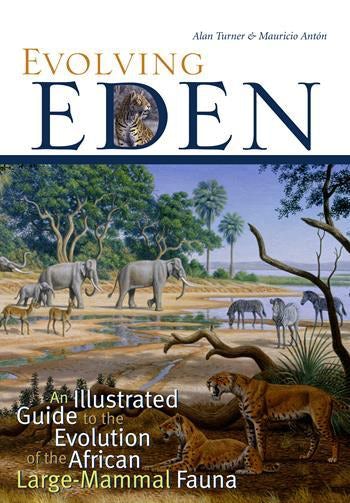 The Garden of Eden as the ideal and untouched site of life's creation persists in popular thought, even as we have uncovered a lengthy fossil record and developed a scientific understanding of evolution. The continent of Africa is a good candidate for Eden: its generally warm climate, rich vegetation, and variety of animal species lend themselves easily to such a comparison. Yet in the time since the first primates appeared millions of years ago, Africa has undergone profound alterations in physical geography, climate, and biota.

Linking the evidence of the past with that of the present, this exquisitely illustrated guide examines the evolution of the mammalian fauna of Africa within the context of dramatic changes over the course of more than 30 million years of primate presence. The book covers such topics as dating, continental drift, and global climate change and the likely motors of evolution as well as the physical evolution of the African continent, including present and past climates, and the major determinants of plant and mammal distributions. The authors discuss human evolution as a part of the larger pattern of mammalian evolution while responding to the unique interest that we have in our own past.

The meticulous reconstructions of fossil mammals in this book are the result of detailed anatomical research. Restorations of mammalian musculature and appearance take into account the affinities between fossil forms and extant species in order to make well-founded inferences about unpreserved animal attributes. Environmental reconstructions benefit from the authors' visits to more than a dozen wildlife preserves in five African countries as well as the use of an extensive database of published studies on the evolution of landscapes on the continent. A fascinating read and a visual feast, Evolving Eden lays the foundation for a deeper appreciation of contemporary African wildlife.

This artistic and scholarly triumph belongs in all academic libraries...Highly recommended. Choice

A fascinating read and a visual feast, this book lays the foundation for a deeper appreciation of contemporary African wildlife. Ethnology, Ecology & Evolution

This book can be recommended for its illustrations alone... Add to this extensive research and explanations and you have an excellent book on the evolution of African large mammals. E-Streams

Important for present-day conservationalists who want to protect this "Garden of Eden." Asad R. Rahmani, Hornbill

[It] fills an obvious gap in the popular scientific literature... It is a worthy addition to any fossil fan's library. Fossil News

Alan Turner is professor of Vertebrate paleontology at John Moores University in Liverpool, England, and former senior curator of paleontology at the Transvaal Museum in Pretoria, South Africa. He is the author, with Mauricio Antón, of The Big Cats and Their Fossil Relatives.

Mauricio Antón is a paleontological artist based at the National Museum of Natural Sciences in Madrid. His work has appeared in National Geographic and Natural History, among other magazines. He has collaborated with the Discovery Channel and the BBC, most recently for the series Walking with Prehistoric Beasts. He is the author, with Jordi Agustí, of Mammoths, Sabertooths, and Hominids.