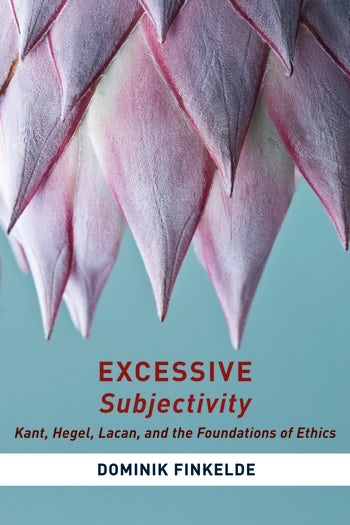 How are we to conceive of acts that suddenly expose the injustice of the prevailing order? These acts challenge long-standing hidden or silently tolerated injustices, but as they are unsupported by existing ethical rules they pose a drastic challenge to dominant norms. In Excessive Subjectivity, Dominik Finkelde rereads the tradition of German idealism and finds in it the potential for transformative acts that are capable of revolutionizing the social order.

Finkelde's discussion of the meaning and structure of the ethical act meticulously engages thinkers typically treated as opposed—Kant, Hegel, and Lacan—to develop the concept of excessive subjectivity, which is characterized by nonconformist acts that reshape the contours of ethical life. For Kant, the subject is defined by the ethical acts she performs. Hegel interprets Kant's categorical imperative as the ability of an individual's conscience to exceed the existing state of affairs. Lacan emphasizes the transgressive force of unconscious desire on the ethical agent. Through these thinkers Finkelde develops a radical ethics for contemporary times. Integrating perspectives from both analytical and continental philosophy, Excessive Subjectivity is a distinctive contribution to our understanding of the ethical subject.

The predominant notion of subjectivity today is the Habermasian project of the mutual recognition of free responsible agents. What disappears in this project is the antagonistic core of subjectivity, a traumatic disturbance inscribed into the very notion of subject from Kant to Hegel. With reference to Lacan, Finkelde forcefully brings back this obliterated dimension: the true meaning of "excessive subjectivity" is that subjectivity is as such an excess. Excessive Subjectivity is not just an important contribution to the topic of subjectivity; it does much more: it redefines the entire field. In short, it is an instant classic. Slavoj Žižek, University of Ljubljana and New York University

Finkelde incisively interrogates Kant's, Hegel's, and Lacan's theories of subjectivity to produce a timely account of the structure of the "excessive" subject: the subject that is able to break with the established order through its exceptional self-constituting act, thereby producing fundamentally new possibilities for ethical life. Far-ranging and trenchant, this work develops new connections within established theories of subjectivity and offers in its own right a radical new theory of action, practice, and transformation. It will be sought out by all those interested in how the classical and contemporary theory of the subject bears on the broadest problems of thought and action today. Paul Livingston, University of New Mexico

Excessive Subjectivity is a compellingly engaging book dealing with a very topical issue, namely the need to address, think, and reconfigure the concept of subjectivity today. Dominik Finkelde does so through a most original bringing together of Kant, Hegel, and Lacan, staging the discussion in terms of both classical and very contemporary problems of philosophy, politics, and ethics. This book was greatly needed! Alenka Zupančič, Slovenian Academy of Sciences and Arts

Finkelde's investigation is an impressive and precise inquiry into subjectivity as a distorting factor in any account of how things really are. Ontology as our inquiry into what there is affects what there is in that subjectivity always goes beyond itself. Finkelde's lucid reconstruction of difficult figures like Hegel or Lacan as well as his take on their relationship to Kant shows that subjectivity is a feature of reality and not just a hallmark of the conscious mind. He thereby successfully undermines a problematic cornerstone assumption of contemporary philosophy of mind. Highly recommended for anyone interested in the figures discussed in this book or the topic of subjectivity. Markus Gabriel, director of the International Center for Philosophy, University of Bonn

Lacan’s reliance on the legacy of German Idealism is widely known, but Dominik Finkelde’s nuanced account of the trajectory of the ‘paradox of autonomy’ through Kant and Hegel to Lacan is nothing short of masterful. One of the more valuable features of Finkelde’s treatment resides in showing not only how the ethical subject acts “excessively,” paradoxically beyond and ahead of itself, but also in demonstrating the points of deep contact of this predominantly continental conception with key figures and problematics in the Anglo-American analytic tradition. An outstanding contribution. Richard Boothby, Loyola University Maryland

A bold and remarkable book. . . . [Excessive Subjectivity] is a unique and vital contribution to an ongoing and important discussion of the central issues raised by the work of Kant, Hegel and Lacan; it is also of interest for philosophers and those interested in contemporary political theory and theology concerning freedom, subjectivity, excessive subjectivity, ethics, change, and what contributes to or brings about desired change. Klas Roth, Notre Dame Philosophical Reviews

Dominik Finkelde is professor of contemporary political philosophy and epistemology at the Munich School of Philosophy.