Life on the Margins in a Residential Motel 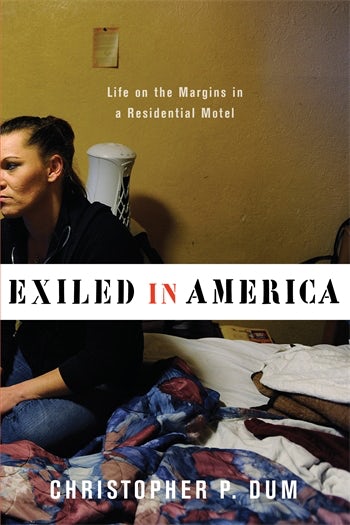 Life on the Margins in a Residential Motel

Residential motels have long been places of last resort for many vulnerable Americans—released prisoners, people with disabilities or mental illness, struggling addicts, the recently homeless, and the working poor. Cast aside by their families and mainstream society, they survive in squalid, unsafe, and demeaning circumstances that few of us can imagine.

For a year, the sociologist Christopher P. Dum lived in the Boardwalk Motel to better understand its residents and the varied paths that brought them there. He witnessed moments of violence and conflict, as well as those of care and compassion. As told through the voices and experiences of motel residents, Exiled in America paints a portrait of a vibrant community whose members forged identities in response to overwhelming stigma and created meaningful lives despite crushing economic instability.

In addition to chronicling daily life at the Boardwalk, Dum follows local neighborhood efforts to shut the establishment down, leading to a wider analysis of legislative attempts to sanitize shared social space. He also suggests meaningful policy changes to address the societal failures that lead to the need for motels such as the Boardwalk. The story of the Boardwalk, and the many motels like it, will concern anyone who cares about the lives of America's most vulnerable citizens.

Exiled in America is a keen, well-written study of the powerful social forces of inequality as they are shaped by cultural issues and social institutions. Christopher P. Dum provides an unusual glimpse of a unique population living in a difficult and hazardous place—a nuanced and important work. Terry Williams, author of The Con Men: Hustling in New York City

Living in a poverty motel that houses the most marginalized and scrutinized populations in the United States, Dum documents the lived drama of managed stigma, the eruptive proclivities of a caring fragile community of 'social refugees,' the tragedy of public indifference, and the humanity of capitalism's newly rendered 'huddled masses.' It is a story that can only be told through immersive ethnography. Timothy Black, author of When a Heart Turns Rock Solid: The Lives of Three Puerto Rican Brothers On and Off the Streets

It is not often, after forty years in the field, that I actually get excited by a new scholar's tone—that I find it so fascinating, so rich, so theoretically and analytically thick, that I go agog over it. Such is the case with Dum's work. Peter Adler, University of Denver

Dum digs down deep inside the darkness of marginality and exclusion to find the lives that others willfully ignore. Amidst that darkness he discovers hard living and plenty of hurt but something else as well: little flowerings of courage and community. An exemplar of engaging ethnography, Exiled in America is a book that I've now read twice and will no doubt read again—it's that good. Jeff Ferrell, author of Empire of Scrounge: Inside the Urban Underground of Dumpster Diving, Trash Picking, and Street Scavenging

Exiled in America is a compelling and compassionate look at people living at society's margins. Dum details the evolution of the 'no tell' Boardwalk Motel, the people who live there, and the social dynamics among themselves and the surrounding community, illustrating our 'dystopian cultural response to inequality.' Ethnography at its best! Andrea Leverentz, author of The Ex-Prisoner's Dilemma: How Women Negotiate Competing Narratives of Reentry and Desistance

[A] revealing, rigorously academic work.... [Dum] places the painful experiences of these residents in the larger societal context: rising rates of incarceration, foreclosures, evictions, and homelessness have in recent years turned many nonchain motels into shelters for the marginalized. Kirkus Reviews (starred review)

This book, Dum's debut, is a lively evocation of a precarious, misunderstood community's rhythms, textures, and tools for living together. It also contains a nicely potted history of American motels, once symbols of freedom for car-owning travelers, now disreputable, last-ditch options for the transient and marginalized—living monuments to what happens when massive social problems run up against a national desire for Band-Aid solutions. Peter C. Baker, Pacific Standard

Exiled in America is on the whole an exemplary piece of social reportage and analysis. Inside Higher Ed

Dum’s ethnographic work shines, and readers from a variety of backgrounds will find nuggets of insight throughout the analysis. Anyone interested in poverty, social policy, and criminal justice will want to read this book. John N. Robinson III, Washington University in St. Louis, American Journal of Sociology

Christopher P. Dum is assistant professor in the Department of Sociology at Kent State University. He is a contributor to Justice Quarterly and Children and Youth Services Review.