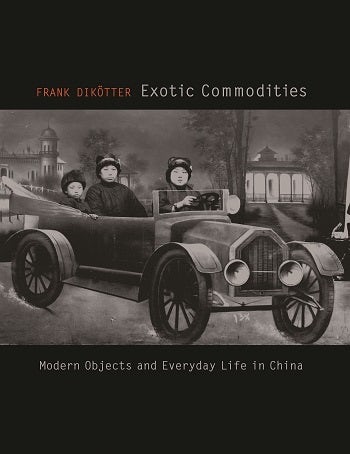 Exotic Commodities is the first book to chart the consumption and spread of foreign goods in China from the mid-nineteenth century to the advent of communism in 1949. Richly illustrated and revealing, this volume recounts how exotic commodities were acquired and adapted in a country commonly believed to have remained "hostile toward alien things" during the industrial era.

China was not immune to global trends that prized the modern goods of "civilized" nations. Foreign imports were enthusiastically embraced by both the upper and lower classes and rapidly woven into the fabric of everyday life, often in inventive ways. Scarves, skirts, blouses, and corsets were combined with traditional garments to create strikingly original fashions. Industrially produced rice, sugar, wheat, and canned food revolutionized local cuisine, and mass produced mirrors were hung on doorframes to ward off malignant spirits.

Frank Dikötter argues that ordinary people were the least inhibited in acquiring these products and therefore the most instrumental in changing the material culture of China. Landscape paintings, door leaves, and calligraphy scrolls were happily mixed with kitschy oil paintings and modern advertisements. Old and new interacted in ways that might have seemed incongruous to outsiders but were perfectly harmonious to local people.

This pragmatic attitude would eventually lead to China's own mass production and export of cheap, modern goods, which today can be found all over the world. The nature of this history raises the question, which Dikötter pursues in his conclusion: If the key to surviving in a fast-changing world is the ability to innovate, could China be more in tune with modernity than Europe?

Dikötter's account of the growth of modern consumption in China is vivid, lively and compelling. Delia Davin, Times Literary Supplement

This is a book that can be read with pleasure by anyone interested in modern China. Susan Naquin, The China Quarterly

[An] important and wide-ranging book... that will surely make us rethink a good number of our deeply held assumptions. Omar Lizardo, American Journal of Sociology

This encyclopedic treatment of Chinese material culture will be a boon to all scholars of the period. Karl Gerth, American HIstorical Review

Frank Dikötter is professor of the modern history of China at the School of Oriental and African Studies, University of London, and chair professor of humanities at the University of Hong Kong. His books include Imperfect Conceptions: Medical Knowledge, Birth Defects, and Eugenics in China and Crime, Punishment, and the Prison in Modern China, 1895-1949, both published by Columbia, and The Discourse of Race in Modern China.