Human Embryo Research and the Politics of Bioethics 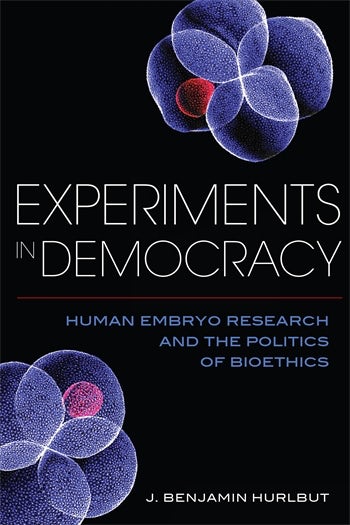 Human Embryo Research and the Politics of Bioethics

Human embryo research touches upon strongly felt moral convictions, and it raises such deep questions about the promise and perils of scientific progress that debate over its development has become a moral and political imperative. From in vitro fertilization to embryonic stem cell research, cloning, and gene editing, Americans have repeatedly struggled with how to define the moral status of the human embryo, whether to limit its experimental uses, and how to contend with sharply divided public moral perspectives on governing science.

Experiments in Democracy presents a history of American debates over human embryo research from the late 1960s to the present, exploring their crucial role in shaping norms, practices, and institutions of deliberation governing the ethical challenges of modern bioscience. J. Benjamin Hurlbut details how scientists, bioethicists, policymakers, and other public figures have attempted to answer a question of great consequence: how should the public reason about aspects of science and technology that effect fundamental dimensions of human life? Through a study of one of the most significant science policy controversies in the history of the United States, Experiments in Democracy paints a portrait of the complex relationship between science and democracy, and of U.S. society's evolving approaches to evaluating and governing science's most challenging breakthroughs.

Where is American democracy made? In this path-breaking study of bioethics bodies, Hurlbut finds answers in an unexpected place. Tracing the contorted history of US debates on human embryo research, he brilliantly reveals the power accorded to scientific authority in establishing the preconditions, and even the right language, for valid moral reasoning. Full of original insights, and supported by a wealth of archival research, this is political theory remade with the tools of science and technology studies. It deserves a place beside John Rawls' seminal works on democratic deliberation and public reason. Sheila Jasanoff, Pforzheimer Professor of Science and Technology Studies, Harvard Kennedy School

In this book, Hurlbut takes the social analysis of public bioethics to the next and higher level. With a focus on how bioethics claims are justified in liberal democratic societies and with a keen interpretive eye on debates about human embryos, I found many of his analyses to be profoundly insightful. This book is a must read for anyone interested in bio-policy in general and public bioethics in particular. John H. Evans, University of California, San Diego

A well-documented and rigorously argued book that analyzes the modes of public reason that have guided U.S. debates about the human embryo. Hurlbut shows how prevailing modes of reasoning gave science a constitutional role in configuring the terms of ethical discourse. Experiments in Democracy offers a fascinating study of the role of scientific authority in deliberation about bioethical issues in the United States. Important for understanding bioethical debates and the contemporary politics of American democracy. Stephen Hilgartner, Department of Science & Technology Studies, Cornell University

Hurlbut provides an important new line of inquiry for histories of bioethics in the United States and elsewhere. Isis

This is a great book on issues of bioethics, and the roles played by, and the inter-relationships among people of authority in government, in law, and in science BizIndia

A fascinating and necessary review of the multifaceted issues cultivated by these revolutionary breakthroughs. Essential. All readers. Choice

Science historian Benjamin Hurlbut offers a wide-angle history of US attempts at democratic deliberation on the ethics of human-embryo research. Painstakingly researched and spanning more than four decades — from the advent of in vitro fertilization in the 1970s to contemporary developments such as germline editing — the book draws attention to an intricate interplay between science and democracy. Nature

An important contribution to the science technology studies (STS) literature on the mechanisms of governance of emerging biotechnologies. Bioethical Inquiry

J. Benjamin Hurlbut is assistant professor in the School of Life Sciences at Arizona State University.