A View from the Margins 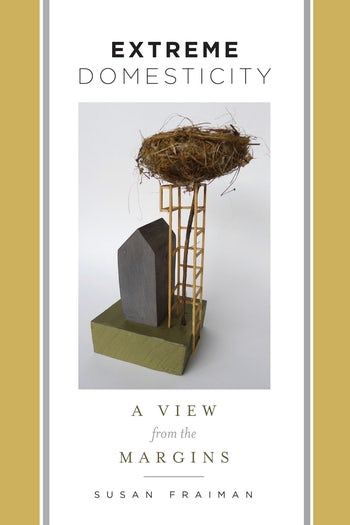 A View from the Margins

Domesticity gets a bad rap. We associate it with stasis, bourgeois accumulation, banality, and conservative family values. Yet in Extreme Domesticity, Susan Fraiman reminds us that keeping house is just as likely to involve dislocation, economic insecurity, creative improvisation, and queered notions of family. Her book links terms often seen as antithetical: domestic knowledge coinciding with female masculinity, feminism, and divorce; domestic routines elaborated in the context of Victorian poverty, twentieth-century immigration, and new millennial homelessness. Far from being exclusively middle-class, domestic concerns are shown to be all the more urgent and ongoing when shelter is precarious.

Fraiman's reformulation frees domesticity from associations with conformity and sentimentality. Ranging across periods and genres, and diversifying the archive of domestic depictions, Fraiman's readings include novels by Elizabeth Gaskell, Sandra Cisneros, Jamaica Kincaid, Leslie Feinberg, and Lois-Ann Yamanaka; Edith Wharton's classic decorating guide; popular women's magazines; and ethnographic studies of homeless subcultures. Recognizing the labor and know-how needed to produce the space we call "home," Extreme Domesticity vindicates domestic practices and appreciates their centrality to everyday life. At the same time, it remains well aware of domesticity's dark side. Neither a romance of artisanal housewifery nor an apology for conservative notions of home, Extreme Domesticity stresses the heterogeneity of households and probes the multiplicity of domestic meanings.

In Extreme Domesticity, Susan Fraiman continues to perform the crucial task of challenging—in lucid, fervent prose—the "habitual, unthinking" conflations and repudiations that keep women, or the feminized, at the bottom of hierarchies of value. Using a refreshing range of sources, which includes queers, immigrants, and the homeless alongside the more usual "domestic" suspects, Fraiman sets forth a rethinking of domesticity's nature, purpose, location, and creators. It's a timely rethinking that we truly need now. Maggie Nelson, author of The Argonauts

Extreme Domesticity brilliantly explores the homemaking practices that provide sustenance and shelter for the fierce and fragile lives of gender rebels and queer pioneers (even during times of homelessness). It is a lesson in how people find the tools for life-making amongst the ordinary and disregarded materials that surround them; and it is a dazzling excursion across dissident domesticities Ben Highmore, author of Ordinary Lives: Studies in the Everyday

This spirited book rescues housekeeping from its presumed ideological trappings by bringing a host of marginalized subjects back into view. Susan Fraiman demonstrates domesticity's strong creative pull for many working-class, immigrant, queer, divorced, or homeless subjects. Carefully probing a diverse array of homemaking experiences, along with the distinct challenges, comforts, and compensations domestic life can bring, Fraiman honors the rich meanings of home for those too often denied it. A surprising and welcome book. Diana Fuss, author of The Sense of an Interior: Four Rooms and the Writers that Shaped Them

Extreme Domesticity is a startlingly original work that not only offers a contemporary updating of feminist studies on domestic and sentimental fiction, but also establishes provocative new frameworks for understanding modern gender formations. A brilliant and important book! Thomas Foster, author of Transformations of Domesticity in Modern Women's Writing: Homelessness at Home

An imaginative and eye-opening reconceptualization of the idea of home. . . . Fraiman’s close readings of detailed descriptions of housework give ordinary daily operations both dignity and value. Contemporary Women’s Writing

While amply acknowledging domesticity’s historic constraints on women . . . Fraiman advocates for the empowering potential of homemaking for those who struggle to attain a home or who find it healing after trauma. Tulsa Studies in Women’s Literature

A fresh view of domesticity . . . that comes out of dispossession and precarity, a domesticity carefully made out of wreckage and loss by those cast away or cast out. Novel: A Forum on Fiction

Fraiman’s nuanced readings reveal that domesticity can be, and has been, 'reconfigured as a language of female self-sufficiency, ambition, and pleasure.' 4Columns

Insightful and lively. Signs: Journal of Women in Culture and Society

In spirited and welcoming prose, Fraiman makes us rethink the ideological baggage the domestic realm carries. . . . She leaves us contemplating how we—and various others—value, occupy, and adorn both real and imagined dwelling places. ALH

Susan Fraiman is professor of English at the University of Virginia. Her Columbia University Press books include Cool Men and the Second Sex (2003) and Unbecoming Women: British Women Writers and the Novel of Development (1993).