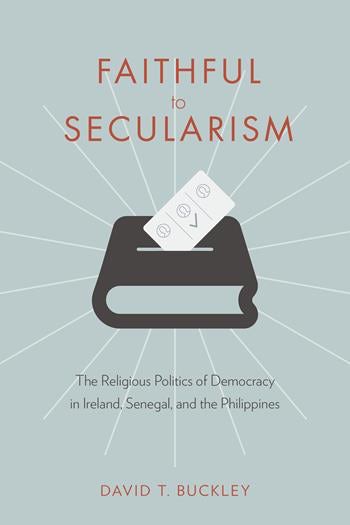 Religion and democracy can make tense bedfellows. Secular elites may view religious movements as conflict-prone and incapable of compromise, while religious actors may fear that anticlericalism will drive religion from public life. Yet such tensions are not inevitable: from Asia to Latin America, religious actors coexist with, and even help to preserve, democracy.

In Faithful to Secularism, David T. Buckley argues that political institutions that encourage an active role for public religion are a key part in explaining this variation. He develops the concept of "benevolent secularism" to describe institutions that combine a basic division of religion and state with extensive room for participation of religious actors in public life. He traces the impact of benevolent secularism on religious and secular elites, both at critical junctures in state formation and as politics evolves over time. Buckley shows how religious and secular actors build credibility and shared norms over time, and explains how such coalitions can endure challenges from both religious revivals and periods of anticlericalism. Faithful to Secularism tests this institutional theory in Ireland, Senegal, and the Philippines, using a blend of archival, interview, and public opinion data. These case studies illustrate how even countries with an active religious majority can become and remain faithful to secularism.

This is a powerfully argued book that makes an original case for a modern understanding of religion and politics and illustrates it brilliantly through the cases of Ireland, Senegal, and the Philippines. I predict that it will become a major work in a fast-growing field and set a new standard for excellence. Daniel Philpott, director of the Program on Religion & Reconciliation, Kroc Institute for International Peace Studies

This is going to be an influential work shaping the emergent field of the comparative politics of secularism. The original concepts of "benevolent secularism" and "secular evolution," drawn from the rich historical analysis of Irish, Senegalese, and Filipino secularism, throughout a century and across two religious traditions and three continents, are likely to prove particularly fruitful in many other settings. José Casanova, Georgetown University

David T. Buckley’s Faithful to Secularism serves as a useful contribution to secularism studies, pushing for a more
nuanced and careful examination of the possible relationships between religion and democracy globally. Sociology of Religion

David T. Buckley is assistant professor and Paul Weber Endowed Chair in Politics, Science, and Religion in the Department of Political Science at the University of Louisville.