Fandango and Other Stories 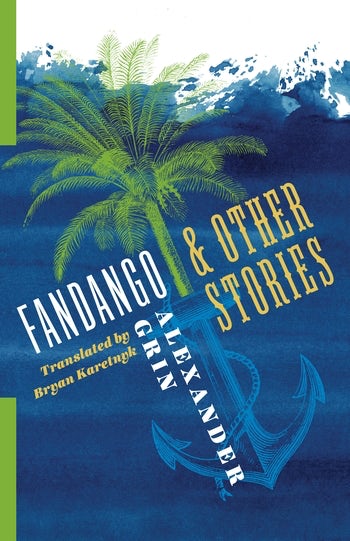 Fandango and Other Stories

In a bucolic idyll, a terrorist agonizes over the act of violence he is about to commit. On a remote island in the South Pacific, the investigation of a case of mass suicide reveals further mysteries. In a far-flung colony, a cynical trio sends an unwitting man into the wilderness in search of a chimera. Mixing romance and high adventure, intrigue and the fantastic, these magnificent tales by one of Russia’s most enduringly popular writers deftly probe the depths of human nature and desire.

Fandango and Other Stories presents a selection of essential short fiction by Alexander Grin, Russia’s counterpart to Robert Louis Stevenson, Edgar Allan Poe, and Alexandre Dumas. By turns a sailor, a dockworker, a vagrant, a gold prospector, a lumberjack, a soldier, a deserter, an agitator, an exile, a prisoner, and a runaway, Grin wrote seven novels and over three hundred short stories that transport the reader to a realm of pure art and imagination. His ingenious plots explore conflicts of the individual and society in a romantic world populated by a cast of eccentric, cosmopolitan characters. Fandango and Other Stories includes works drawn from across the entirety of Grin’s varied career to encompass the range and sophistication of his writing. Bryan Karetnyk’s elegant translations bring Grin’s distinctive voice to a new generation of readers.

Strange and memorable. Students of modern literature should greet this as if discovering hidden treasure. Kirkus Reviews

Over thirty years have passed since any of Alexander Grin's extraordinary work was offered to the English reader. In these sensitive and accurate new translations, justice is finally done to Grin's unique world, sometimes reminiscent of Robert Louis Stevenson and Kafka, but inimitable in the subtlety that underlies its simplicity. Donald Rayfield, Queen Mary University of London

Grin’s prose is beautiful, evocative and striking... Fandango is a marvellous collection of stories and Alexander Grin is obviously a writer whose works have been unjustly neglected. Karen Langley, Shiny New Books

Introduction, by Barry P. Scherr
Translator’s Note
Quarantine
“She”
Lanphier Colony
The Devil of the Orange Waters
The Poisoned Island
The Heart of the Wilderness
The Rat-Catcher
Fandango

Alexander Grin, the nom de plume of Alexander Stepanovich Grinevsky (1880–1932), was a leading Russian writer of fantasy and adventure, most famous for the novel Scarlet Sails. His neoromantic fiction won him enduring popularity but eventually ran afoul of the Soviet authorities. Impoverished and increasingly denied the ability to publish, he died of stomach cancer at the age of fifty-one.

Bryan Karetnyk is a teaching fellow and Wolfson Scholar in the Humanities at University College London. He has translated several major works by Gaito Gazdanov and is the editor and principal translator of the anthology Russian Émigré Short Stories from Bunin to Yanovsky (2017).