Food Films and Cultural Identity in the United States 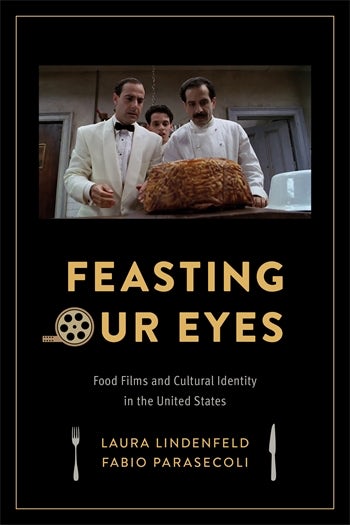 Food Films and Cultural Identity in the United States

Big Night (1996), Ratatouille (2007), and Julie and Julia (2009) are more than films about food—they serve a political purpose. In the kitchen, around the table, and in the dining room, these films use cooking and eating to explore such themes as ideological pluralism, ethnic and racial acceptance, gender equality, and class flexibility—but not as progressively as you might think. Feasting Our Eyes takes a second look at these and other modern American food films to emphasize their conventional approaches to nation, gender, race, sexuality, and social status. Devoured visually and emotionally, these films are particularly effective defenders of the status quo.

Feasting Our Eyes looks at Hollywood films and independent cinema, documentaries and docufictions, from the 1990s to today and frankly assesses their commitment to racial diversity, tolerance, and liberal political ideas. Laura Lindenfeld and Fabio Parasecoli find women and people of color continue to be treated as objects of consumption even in these modern works and, despite their progressive veneer, American food films often mask a conservative politics that makes commercial success more likely. A major force in mainstream entertainment, American food films shape our sense of who belongs, who has a voice, and who has opportunities in American society. They facilitate the virtual consumption of traditional notions of identity and citizenship, reworking and reinforcing ingrained ideas of power.

In Feasting Our Eyes: Food Films and Cultural Identity in the United States, Laura Lindenfeld and Fabio Parasecoli offer a comprehensive study of food films. They frame their discussion around multiple themes that connect food films to identity formation in the United States including race, ethnicity, gender, and sexuality. It is an essential read for all interested in the intersections of food, media, and identity. Peter Naccarato, co-author of Edible Ideologies: Representing Food and Meaning

Feasting Our Eyes offers a thorough and thoughtful examination of food films at the nexus of consumption and citizenship. Lindenfeld & Parasecoli authoritatively argue that food films, although apparently progressive, in fact reinforce the very cultural and social dynamics they wish to critique. Decisive and taut, the book is a must-read. Kathleen LeBesco, author of Revolting Bodies? The Struggle to Redefine Fat Identity

Feasting Our Eyes is a marvel. From the indie classic Babette's Feast to Disney's blockbuster Ratatouille, Lindenfeld and Parasecoli map the origins and evolution of American food films, revealing their ability to reflect and shape our corporeal, emotional, and gustatory desires. Amy Bentley, author of Inventing Baby Food: Taste, Health and the Industrialization of the American Diet

Feasting Our Eyes offers an engaging new perspective on "food films," and how they are often as interesting for what they omit as what they include when it comes to representations of cultural identity. Highly recommended reading. Signe Rousseau, author of Food and Social Media: You Are What You Tweet

Going beyond the obvious "good to eat, good to watch" analysis, Lindenfeld and Parasecoli offer both close-up and wide angle views on food and film, consolidating their considerable expertise to explore the aspirations and contradictions in American cinema. From Big Night to Ratatoille to Food, Inc, the authors unpack visual narratives to show how the desire for belonging in multicultural nations is often at odds with the commodification of authenticity and identity. This is one of the very few books to capture the complications of pleasure and oppression, particularly by noting the absence of labor and the need for reconciliatory, successful happy endings, where food soothes the challenges and disruptions to gender, race, and class hierarchies through consumption. Alice Julier, author of Eating Together: Food, Friendship, and Inequality

Laura Lindenfeld is director of the Alan Alda Center for Communicating Science and professor at the School of Journalism at Stony Brook University. Her work has appeared in Text & Performance Quarterly, Food & Foodways, and the Journal of International and Intercultural Communication.

Fabio Parasecoli is associate professor and director of food studies initiatives at the New School in New York City. Recent books include Bite me! Food in Popular Culture (2008); the six-volume Cultural History of Food, coedited with Peter Scholliers (2012); and Al Dente: A History of Food in Italy (2014).