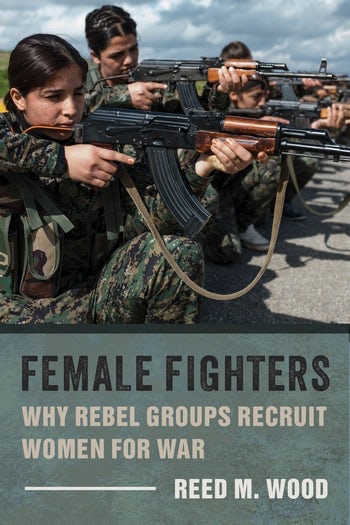 The presence of women combatants on the battlefield—especially in large numbers—strikes many observers as a notable departure from the historical norm. Yet women have played a significant active role in many contemporary armed rebellions. Over recent decades, numerous resistance movements in many regions of the globe have deployed thousands of female fighters in combat.

In Female Fighters, Reed M. Wood explains why some rebel groups deploy women in combat while others exclude women from their ranks, and the strategic implications of this decision. Examining a vast original dataset on female fighters in over 250 rebel organizations, Wood argues rebel groups can gain considerable strategic advantages by including women fighters. Drawing on women increases the pool of available recruits and helps ameliorate resource constraints. Furthermore, the visible presence of female fighters often becomes an important propaganda tool for domestic and international audiences. Images of women combatants help raise a group’s visibility, boost local recruitment, and aid the group’s efforts to solicit support from transnational actors and diaspora communities. However, Wood finds that, regardless of the wartime resource challenges they face, religious fundamentalist rebels consistently resist utilizing female fighters. A rich, data-driven study, Female Fighters presents a systematic, comprehensive analysis of the impact women’s participation has on organized political violence in the modern era.

In this important book, Reed M. Wood builds on feminist scholarship to explain why some rebel groups recruit female fighters while others do not. He finds that secular armed groups overlook traditional gender norms and recruit a higher number of women for combat roles when they face sudden resource constraints. Such decisions often have strategic benefits for rebel groups, yielding greater recruitment overall and eliciting higher levels of support from abroad. Wood shores up an impressive amount of theoretical and empirical evidence to support this argument. An impressive, persuasive read. Erica Chenoweth, coauthor of Why Civil Resistance Works: The Strategic Logic of Nonviolent Conflict

Wood provides a definitive account of the inclusion of women in armed rebellion. Building on Wood's work with Jakana Thomas, this book looks at the adoption of women into rebel forces, the various ways rebel elites have done this, and the motivation to include or exclude women. The analysis is rich in its establishment of clear yet novel expectations based on firm theoretical foundations. Kyle Beardsley, coauthor of Equal Opportunity Peacekeeping: Women, Peace, and Security in Post-Conflict States

Why do some rebel leaders actively recruit women to serve in combat roles? In this engaging study, Wood argues that the recruitment of women serves both strategic and ideological purposes for the armed group. Using an impressive range of data and methods—from cross-national analyses to case studies and survey experiments—Wood highlights the consequences of recruiting female fighters, including mobilizing domestic and international support and increased legitimacy for the group. This is a welcome addition to the growing literature on female combatants, and a must-read analysis for scholars interested in rebel organizations, political violence, and gender. Dara Kay Cohen, author of Rape During Civil War

In a field too often seen through gender stereotypes, Reed M. Wood's thorough empirical analysis grounds us in reality. Female Fighters offers a convincing account of the important roles of women fighters in rebel ranks worldwide. Joshua Goldstein, author of War and Gender: How Gender Shapes the War System and Vice Versa

Reed M. Wood is associate professor in the School of Politics and Global Studies at Arizona State University.