The Checkered History of Weather and Climate Control 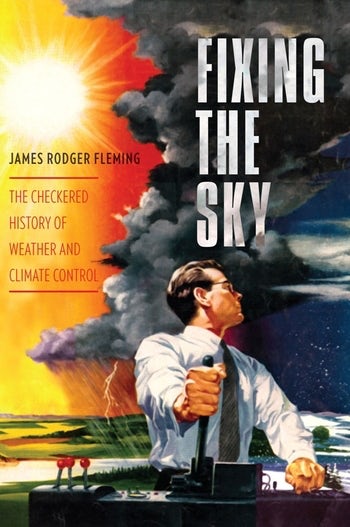 The Checkered History of Weather and Climate Control

As alarm over global warming spreads, a radical idea is gaining momentum. Forget cuts in greenhouse gas emissions, some scientists argue. Instead, bounce sunlight back into space by pumping reflective nanoparticles into the atmosphere. Launch mirrors into orbit around the Earth. Make clouds thicker and brighter to create a "planetary thermostat."

These ideas might sound like science fiction, but in fact they are part of a very old story. For more than a century, scientists, soldiers, and charlatans have tried to manipulate weather and climate, and like them, today's climate engineers wildly exaggerate what is possible. Scarcely considering the political, military, and ethical implications of managing the world's climate, these individuals hatch schemes with potential consequences that far outweigh anything their predecessors might have faced.

Showing what can happen when fixing the sky becomes a dangerous experiment in pseudoscience, James Rodger Fleming traces the tragicomic history of the rainmakers, rain fakers, weather warriors, and climate engineers who have been both full of ideas and full of themselves. Weaving together stories from elite science, cutting-edge technology, and popular culture, Fleming examines issues of health and navigation in the 1830s, drought in the 1890s, aircraft safety in the 1930s, and world conflict since the 1940s. Killer hurricanes, ozone depletion, and global warming fuel the fantasies of today. Based on archival and primary research, Fleming's original story speaks to anyone who has a stake in sustaining the planet.

Current hopes for a technological answer to global warming are not an altogether new quest; they echo a rich history of attempts to work upon the weather. James Rodger Fleming explores this history thoroughly, parading a colorful variety of scientists, visionaries, and charlatans who reveal important lessons about our past-and possible future. Spencer Weart, author of The Discovery of Global Warming

With humanity's planetary impact reaching a Richter scale equivalent, what seem to be quick fixes become exceedingly tempting. Fixing the Sky's historical insights are a revelationan anchor and essential base from which to consider addressing the greatest challenge in the history of our species. Thomas E. Lovejoy, George Mason University and The H. John Heinz III Center for Science, Economics, and the Environment

James Rodger Fleming's book is a kind of tour de folie, an authoritative recounting over two centuries of weather changers and climate controllers, rainmakers and rain fakers, and cloud seeders and fog dissolvers. All in all, an engrossing work about vain hopes and technological hubrisas well as a cautionary tale to anyone concerned with attempts to engineer the planet. Dan Kevles, Yale University

Provides an essential foundation for understanding the long and dubious scientific tradition from which plans for climate control hail. W. Patrick McCray, Science

Fixing the Sky is a very readable, in-depth popular account of the history of weather modification, ranging from myth and movies to experiments, commercial ventures, and proposals for the future control of weather and climate.... Recommended.Choice Choice

Provides a detailed account of weather modification.... The topic is an important one, and the book is relevant for scientists, stakeholders, policy makers, and concerned citizens alike. Rasmus E. Benestad, American Scientist

The topic is an important one, the book is relevant for scientists, stake-holders, policy makers, and concerned citizens alike. Sigma Xi (Reprint of American Scientist Review)

I recommend this book to those interested in weather and climate modification and the history of applied meteorology. The Weather Doctor Blog

Fleming has provided another valuable contribution to the still tiny but emerging historiography of global warming. Sam White, Monthly Review

An entertaining book about a serious issue. Gail Cooper, Technology and Culture

Fleming is a masterful writer, at the top of his game, and his skill and good humor make this book a blast to read. Paul Edwards, H-Environment Roundtable Reviews

This interesting and original work, building off of Fleming's previous studies of meteorology and climate science history, provides valuable perspective on what may soon become serious policy debates over how to respond to global warming. H-Environment

This is a marvellous text for classroom adoption, and will engage undergraduates with its resolute, fairminded and comprehensive approach to a difficult and utterly fascinating subject. Mott Greene, Ambix

Fleming's book should be mandatory reading for each climate engineering enthusiast, as it provides historical precedent to the current debate. Anyone interested in climate change-related issues will benefit from the book because of its easily accessible and jargon-free style. Axel Michaelowa, Climate Policy

...not just a stellar addition to the history of science, but also a major contribution to the discussion on the role of history in science policy. Vladimir Jankovic, Isis

James Rodger Fleming is a historian of science and technology and professor of science, technology, and society at Colby College. He is a fellow of the American Association for the Advancement of Science (AAAS), elected "for pioneering studies on the history of meteorology and climate change and for the advancement of historical work within meteorological societies," and a fellow at the American Meteorological Society. He recently held the Charles A. Lindbergh Chair in Aerospace History at the Smithsonian Institution and the AAAS Roger Revelle Fellowship in Global Stewardship while a public policy scholar at the Woodrow Wilson International Center for Scholars. He enjoys fishing, good jazz, good barbecue, seeing students flourish, building a community of historians of the geosciences, and connecting the history of science and technology with public policy.