The Anglo-American Condition and Its Resolution 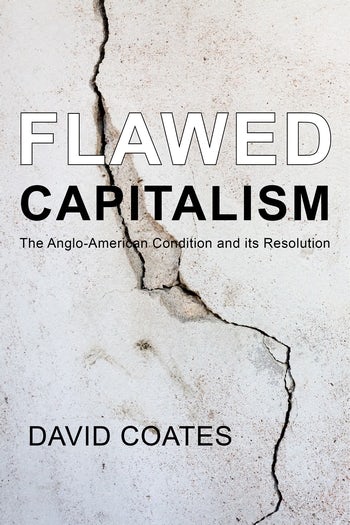 The Anglo-American Condition and Its Resolution

In Flawed Capitalism, David Coates draws on his vast experience of economy and society in both the U.S. and the UK to examine the economic and social problems currently besetting each. Building an argument around the rise and fall of important social settlements, Flawed Capitalism traces the history of the two economies through first their New Deal and then their Reaganite periods—ones labeled differently in the UK, but similarly marked by the development first of a Keynesian welfare state and then a Thatcherite neoliberal one.

It is with the weaknesses and downsides of the Reagan/Thatcher years that Flawed Capitalism is primarily concerned, showing how the underlying fragility of a settlement based on the weakening of organized labor and the extensive deregulation of business culminated in the financial crisis of 2008. The legacies of that crisis haunt us still—a squeezed middle class, further embedded poverty, deepened racial divisions, an adverse work-life balance for two-income families, and a growing crisis of housing and employment for the young. Flawed Capitalism deals with each in turn, and makes the case for the transatlantic creation of a new social settlement—a less flawed capitalism—one based on greater degrees of income equality and social justice.

Anybody seeking to understand why Donald Trump is president and why the UK voted for Brexit should read David Coates’s important new book. It explains the flaws in the Anglo-Saxon economic model; even better, it suggests ways of putting things right. Larry Elliott, economics editor, Guardian

With this provocative book and its bold examination of the past 50 years of political and economic change in the United States and the U.K., David Coates makes an essential contribution to our understanding of the enormous challenges facing both sides of the Atlantic today. Beyond that, it lays bare the choices people and their leaders must make if future generations are to have a semblance of the opportunities we have had. Judy Woodruff, PBS NewsHour

An outstanding study of the Anglo-American condition: Coates combines a powerful moral impulse with impeccable research and a fine grasp of the differences and the similarities between the two nations. Michael Moran, University of Manchester

This excellent book not only shows us how the model of capitalism operating in the U.S. and the UK is flawed, it also tells us why, through an original and engaging account of imperialist politics and ideological hubris in American and British statecraft. Coates’s writing combines both depth and breadth—a very rare feat—and this book deserves to be widely read. Craig Berry, University of Sheffield

David Coates holds the Worrell Chair in Anglo-American Studies in the Department of Political Science at Wake Forest University.