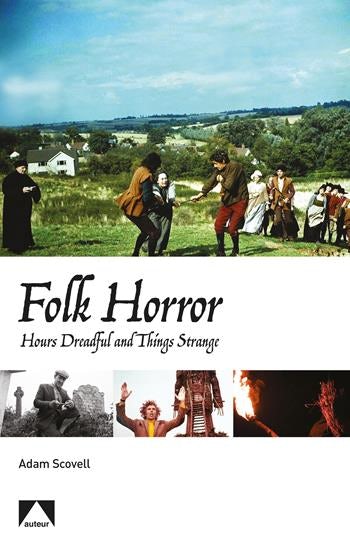 Interest in the ancient, the occult, and the "wyrd" is on the rise. The furrows of Robin Hardy (The Wicker Man), Piers Haggard (Blood on Satan's Claw), and Michael Reeves (Witchfinder General) have arisen again, most notably in the films of Ben Wheatley (Kill List), as has the Spirit of Dark of Lonely Water, Juganets, cursed Saxon crowns, spaceships hidden under ancient barrows, owls and flowers, time-warping stone circles, wicker men, the goat of Mendes, and malicious stone tapes.

Folk Horror: Hours Dreadful And Things Strange charts the summoning of these esoteric arts within the latter half of the twentieth century and beyond, using theories of psychogeography, hauntology, and topography to delve into the genre's output in film, television, and multimedia as its "sacred demon of ungovernableness" rises yet again in the twenty-first century.

Adam Scovell is a Ph.D candidate at the University of Liverpool, a short film-maker, and an authority in the field of folk horror. He blogs at celluloidwickerman.com.