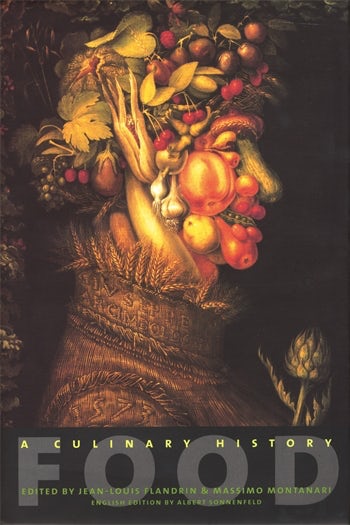 When did we first serve meals at regular hours? Why did we begin using individual plates and utensils to eat? When did "cuisine" become a concept and how did we come to judge food by its method of preparation, manner of consumption, and gastronomic merit?

Food: A Culinary History explores culinary evolution and eating habits from prehistoric times to the present, offering surprising insights into our social and agricultural practices, religious beliefs, and most unreflected habits. The volume dispels myths such as the tale that Marco Polo brought pasta to Europe from China, that the original recipe for chocolate contained chili instead of sugar, and more. As it builds its history, the text also reveals the dietary rules of the ancient Hebrews, the contributions of Arabic cookery to European cuisine, the table etiquette of the Middle Ages, and the evolution of beverage styles in early America. It concludes with a discussion on the McDonaldization of food and growing popularity of foreign foods today.

From the Bible and ancient Egypt to the 'banquets'of the Middle Ages and the 'McDonaldization'of Europe, Food: A Culinary History covers the immense history of the table throughout the world. Well researched and scholarly, it is essential reading for the historian and the lover of social studies as well as the modern cook and gourmet. Jacques Pépin

Vastly informative.... Jean-Louis Flandrin and Massimo Montanari have done a marvelous job of making all these aspects of food history make sense from prehistory to the present. Eugen Weber, Times Literary Supplement

Although written in a sophisticated manner, this is a thorough, up-to-date overview of a universally appealing topic. School Library Journal

Now that gastronomy and the culinary arts in general are finally being accepted as legitimate academic subjects, it is time we had available to us a copious and worthy sourcebook. The Flandrin and Montanari Food: A Culinary History is exactly what we have needed. Literally overflowing with facts, anecdotes, and histories, it is a major compendium for those in the profession as well as a delightful store of knowledge for anyone who loves to read. Julia Child

A massive but tasty compendium called Food: A Culinary History demonstrates that the art of dining has gone through some astonishing changes through the centuries. Herbert Kupferberg, Parade Magazine

Food: A Culinary History is essential reading for students of the rich and influential culinary tradition rooted in the Mediterranean. It is provocative in providing a framework for a more general history of European foodways. Journal of Social History

The dense, illuminating, sometimes delightful, occasionally maddening collection of essays and papers introduced and edited by Flandrin and Montanari... aspires to be nothing short of a complete history of man's experience and conduct at the table... A cornucopia of captivating, subtle, myth de-bunking information, research and insight. Michael Frank, LOS ANGELES TIMES BOOK REVIEW

Introduction to the Original Edition
One: Prehistory and Early Civilizations
Introduction: The Humanization of Eating Behaviors, by Jean-Louis Flandrin
1. Feeding Strategies in Prehistoric Times, by Catherine Perles
2. The Social Function of Banquets in the Earliest Civilizations, by Francis Joannes
3. Food Culture in Ancient Egypt, by Edda Bresciani
4. Biblical Reasons: The Dietary Rules of the Ancient Hebrews, by Jean Soler
5. The Phoenicians and the Carthaginians: The Early Mediterranean Diet, by Antonella Spano Giammellaro
Two: The Classical World
Introduction: Food Systems and Models of Civilization, by Massimo Montanari
6. Urban and Rural Diets in Greece, by Marie-Claire Amouretti
7. Greek Meals: A Civic Ritual, by Pauline Schmitt-Pantel
8. The Culture of the Symposium, by Massimo Vetta
9. The Diet of the Etruscans, by Giuseppe Sassatelli
10. The Grammar of Roman Dining, by Florence Dupont
11. The Broad Bean and the Moray: Social Hierarchies and Food in Rome, by Mireille Corbier
12. Diet and Medicine in the Ancient World, by Innocenzo Mazzini
13. The Food of Others, by Oddone Longo
Three: From the Late Classical Period to the Early Middle Ages (Fifth--Tenth Centuries)
Introduction: Romans, Barbarians, Christians--The Dawn of European Food Culture, by Massimo Montanari
14. Production Structures and Food Systems in the Early Middle Ages, by Massimo Montanari
15. Peasants, Warriors, Priests: Images of Society and Styles of Diet, by Massimo Montanari
Four: Westerners and Others
Introduction: Food Models and Cultural Identity, by Massimo Montanari
16. Christians of the East: Rules and Realities of the Byzantine Diet, by Ewald Kislinger
17. Arab Cooking and Its Contribution to European Culture, by Bernard Rosenberger
18. Mediterranean Jewish Diet and Traditions in the Middle Ages, by Miguel-Angel Motis Dolader
Five: The Late Middle Ages (Eleventh--Fourteenth Centuries)
Introduction: Toward a New Dietary Balance, by Massimo Montanari
19. Society, Food, and Feudalism, by Antoni Riera-Melis
20. Self-Sufficiency and the Market: Rural and Urban Diet in the Middle Ages, by Alfio Cortonesi
21. Food Trades, by Francoise Desportes
22. The Origins of Public Hostelries in Europe, by Hans Conrad Peyer
23. Medieval Cooking, by Bruno Laurioux
24. Food and Social Classes in Late Medieval and Renaissance Italy, by Allen J. Grieco
25. Seasoning, Cooking, and Dietetics in the Late Middle Ages, by Jean-Louis Flandrin
26. "Mind Your Manners": Etiquette at the Table, by Daniela Romagnoli
27. From Hearth to Table: Late Medieval Cooking Equipment, by Francoise Piponnier
Six: The Europe of Nation-States (Fifteenth--Eighteenth Centuries)
Introduction: The Early Modern Period, by Jean-Louis Flandrin
28. Growing without Knowing Why: Production, Demographics, and Diet, by Michel Morineau
29. Colonial Beverages and the Consumption of Sugar, by Alain Huetz de Lemps
30. Printing the Kitchen: French Cookbooks, 1480--1800, by Philip Hyman and Mary Hyman
31. Dietary Choices and Culinary Technique, 1500--1800, by Jean-Louis Flandrin
32. From Dietetics to Gastronomy: The Liberation of the Gourmet, by Jean-Louis Flandrin
Seven: The Contemporary Period (Nineteenth and Twentieth Centuries)
Introduction: From Industrial Revolution to Industrial Food, by Jean-Louis Flandrin
33. The Transformation of the European Diet, by Hans Jurgen Teuteberg and Jean-Louis Flandrin
34. The Invasion of Foreign Foods, by Yves Pehaut
35. The Rise of the Restaurant, by Jean-Robert Pitte
36. The Food Industry and New Preservation Techniques, by Giorgio Pedrocco
37. The Taste for Canned and Preserved Food, by Alberto Capatti
38. The Emergence of Regional Cuisines, by Julia Csergo
39. The Perils of Abundance: Food, Health, and Morality in American History, by Harry A. Levenstein
40. The "McDonaldization" of Culture, by Claude Fischler
Conclusion: Today and Tomorrow, by Jean-Louis Flandrin and Massimo Montanari

Jean-Louis Flandrin is professor emeritus at the University of Paris VIII-Vincennes.

Massimo Montanari is professor of medieval history and the history of food at the Institute of Paleography and Medieval Studies, University of Bologna.