For His Eyes Only

The Women of James Bond 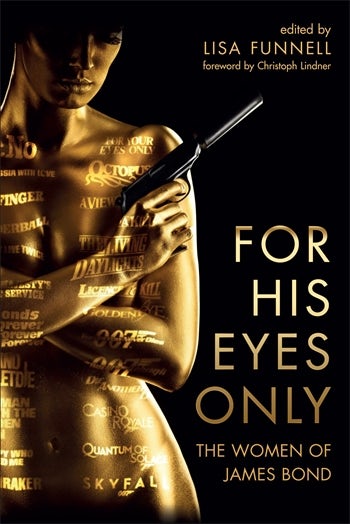 For His Eyes Only

The Women of James Bond

The release of Skyfall in 2012 marked the fiftieth anniversary of the James Bond film franchise. It earned over one billion dollars in the worldwide box office and won two Academy Awards. Amid popular and critical acclaim, some have questioned the representation of women in the film. From an aging M to the limited role of the Bond Girl and the characterization of Miss Moneypenny as a defunct field agent, Skyfall develops the legacy of Bond at the expense of women.

Since Casino Royale (2006) and its sequels Quantum of Solace (2008) and Skyfall constitute a reboot of the franchise, it is time to question whether there is a place for women in the new world of James Bond and what role they will play in the future of series. This volume answers these questions by examining the role that women have historically played in the franchise, which greatly contributed to the international success of the films.

This academic study constitutes the first book-length anthology on femininity and feminism in the Bond series. It covers all twenty-three Eon productions as well as the spoof Casino Royale (1967), considering a range of factors that have shaped the depiction of women in the franchise, including female characterization in Ian Fleming's novels; the vision of producer Albert R. Broccoli and other creative personnel; the influence of feminism; and broader trends in British and American film and television. The volume provides a timely look at women in the Bond franchise and offers new scholarly perspectives on the subject.

At long last, a book about the women of Bond that not only fills a gap in Bond scholarship but also contributes to a wider understanding of the representation of women, and the relationship between gender politics and the media. This is an eye-opening collection for anyone who wants to see beyond the iconic images from past and present to consider that the world of Bond is nothing without women, and that understanding the representation of women in the franchise is a complex process. Claire Hines, Southampton Solent University

This comprehensive and impressive collection of essays is essential for those working within the burgeoning area of 'Bond studies'. It covers a broad spectrum of topics, from the colonisation of the black and Asian female agent's body to the franchise's troubled negotiation of patriarchy and feminism, and from the articulation of female desire to the problem of female authority in the Bond fantasy. The book is absolutely up to date, with a whole section devoted to Skyfall and to Judi Dench's legacy as M. Containing contributions from established and emerging scholars, its combination of breadth and depth makes it both a pleasure to read and an important addition to the literature on the subject. Estella Tincknell, University of the West of England

This extensive yet accessible collection forms a vital and timely addition to the existing academic literature on the Bond franchise. Drawing together international and interdisciplinary perspectives, the book offers diverse critical approaches to the close analysis of gender, sexuality, ethnicity, age, national identity and power in the films. It is essential reading for students and scholars alike. Sarah Gilligan, Hartlepool College

An illuminating and provocative new contribution to 'Bondology.' Journal of British Cinema and Television

Acknowledgements
Foreword, by Christoph Lindner
Introduction: The Women of James Bond, by Lisa Funnell
Section 1: From Novel to Film
1. "Women Were for Recreation": The Gender Politics of Ian Fleming's James Bond, by James Chapman
2. The Bond Girl Who Is Not There: The Tiffany Case, by Boel Ulfsdotter
3. James Bond and Female Authority: The Female M in the Bond Novels and Films, by Jim Leach
Section 2: Desiring the Other
4. Desiring the Soviet Woman: Tatiana Romanova and From Russia with Love, by Thomas M. Barrett.
5. "The Old Ways Are Best": The Colonization of Women of Color in Bond Films, by Travis L. Wagner
6. Bond's Bit on the Side: Race, Exoticism and the Bond "Fluffer" Character, by Charles Burnetts
7. The Politics Representation: Disciplining and Domesticating Miss Moneypenny in Skyfall, by Kristen Shaw
8. Objects of White Male Desire: (D)Evolving Representations of Asian Women in Bond Films, by Lisa Funnell
Section 3: Feminist Critiques and Movements
9. "Never Trust a Rich Spy": Ursula Andress, Vesper Lynd, and Mythic Power in Casino Royale 1967, by Robert von Dassanowsky
10. "This Never Happened to the Other Fellow": On Her Majesty's Secret Service as Bond Woman's Film, by Marlisa Santos
11. "What Really Went on up There James?": Bond's Wife, Blofeld's Patients, and Empowered Bond Women, by Dan Mills
12. Sisterhood as Resistance in For Your Eyes Only and Octopussy, by Fernando Gabriel Pagnoni Berns
13. Bond Is Not Enough: Elektra King and the Desiring Bond Girl, by Alexander Sergeant
Section 4: Gendered Conventions
14. Female Bodies in James Bond Title Sequences, by Sabine Planka
15. Random Access Mysteries: James Bond and the Matter of the Unknown Woman, by Eileen Rositzka
16. Pussy Galore: Women and Music in Goldfinger, by Catherine Haworth
17. Female Voice and the Bond Films, by Anna G. Piotrowska
18. Designing Character: Costume, Bond Girls, and Negotiating Representation, by Andrea J. Severson
Section 5: Female Agency and Gender Roles
19. Secret Agent Nuptials: Marriage, Gender Roles, and the "Different Bond Woman" in On Her Majesty's Secret Service, by Stephen Nepa
20. The Spy Who Fooled Me: The Early Bond Girl and the Magician's Assistant, by Ross Karlan
21. "Women Drivers": The Changing Role of the Bond Girl in Vehicle Chases, by Stephanie Jones
22. "It's Not for Everyone": James Bond and Miss Moneypenny in Skyfall, by Klaus Dodds
23. "Who Is Salt?": The Difficulty of Constructing a Female James Bond and Reconstructing Gender Expectations, by Jeffrey A. Brown
Section 6: Judi Dench's Tenure as M
24. From Masculine Mastermind to Maternal Martyr: Judi Dench's M, Skyfall, and the Patriarchal Logic of James Bond Films, by Peter C. Kunze
25. M, 007, and the Challenge of Female Authority in the Bond Franchise, by Brian Patton
26. "M"(o)thering: Female Representation of Age and Power in James Bond, by Lori L. Parks
27. Mothering the Bond-M Relation in Skyfall and the Bond Girl Intervention, by Christopher Holliday
28. Property of a Lady: (S)Mothering Judi Dench's M, by Michael W. Boyce
Bibliography
Index

Lisa Funnell is assistant professor in the Women's and Gender Studies Program at the University of Oklahoma. She is the author of Warrior Women: Gender, Race, and the Transnational Chinese Action Star and has published extensively on gender in the James Bond franchise.