For Kin or Country

Stephen M. Saideman and R. William Ayres. With a new introduction by the authors 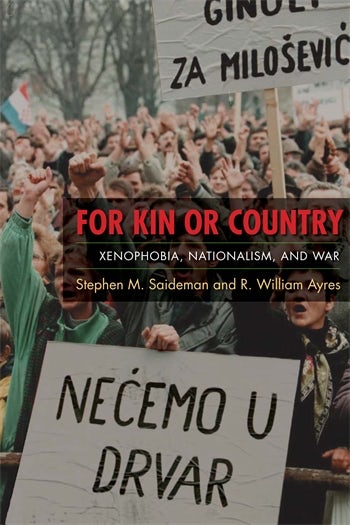 For Kin or Country

Stephen M. Saideman and R. William Ayres. With a new introduction by the authors

The collapse of an empire can result in the division of families and the redrawing of geographical boundaries. New leaders promise the return of people and territories that may have been lost in the past, often advocating aggressive foreign policies that can result in costly and devastating wars. The final years of the Austro-Hungarian and Ottoman empires, the end of European colonization in Africa and Asia, and the demise of the Soviet Union were all accompanied by war and atrocity.

These efforts to reunite lost kin are known as irredentism—territorial claims based on shared ethnic ties made by one state to a minority population residing within another state. For Kin or Country explores this phenomenon, investigating why the collapse of communism prompted more violence in some instances and less violence in others. Despite the tremendous political and economic difficulties facing all former communist states during their transition to a market democracy, only Armenia, Croatia, and Serbia tried to upset existing boundaries. Hungary, Romania, and Russia practiced much more restraint.

The authors examine various explanations for the causes of irredentism and for the pursuit of less antagonistic policies, including the efforts by Western Europe to tame Eastern Europe. Ultimately, the authors find that internal forces drive irredentist policy even at the risk of a country's self-destruction and that xenophobia may have actually worked to stabilize many postcommunist states in Eastern Europe.

Events in Russia and Eastern Europe in 2014 have again brought irredentism into the headlines. In a new Introduction, the authors address some of the events and dynamics that have developed since the original version of the book was published. By focusing on how nationalist identity interact with the interests of politicians, For Kin or Country explains why some states engage in aggressive irredentism and when others forgo those opportunities that is as relevant to Russia and Ukraine in 2014 as it was for Serbia, Croatia, and Armenia in the 1990s.

[For Kin or Country] deserves to be on the bookshelf of every serious scholar of nationalism and ethnic conflict. Eric Kaufmann, Nations and Nationalism

The most comprehensive and nuanced account to date of irredentism.... A useful reference and an important touchstone for comparative politics and international relations scholars interested in irredentism, secessionism, and kin-state nationalism. Myra A. Waterbury, Nationalities Papers

I highly recommend this book to those interested in ethnic politics, irredentism, conflict, and nationalism. The book makes a significant contribution to our understanding of world politics through the lens of conflict, or the lack thereof, with respect to national minorities or lost ethnic kin in their respective host states. I believe that both academics and practitioners will find it a clear and excellent book to read on this complex topic. Anna Batta, H-War

Acknowledgments
List of Tables and Figures
Introduction to the 2015 Edition
Introduction
1. Irredentism and Its Absence: International Presures Versus Domestic Dynamics
2. Dueling Irredentisms: Greater Croatia and Greater Serbia
3. Reunification at Any Price: Armenia and Nagorno-Karabakh
4. Pushing the Envelope: Hungary's Assertive Attention to Kin
5. Romania's Restraint? Avoiding the Worst Through Domestic Scapegoating
6. Breaking Up Is Hard to Do: Russia and Its Kin in the Near Abroad
7. War and Peace in Eastern Europe, the Former Soviet Union, and Beyond
8. Findings and Implications
References
Index

Stephen M. Saideman holds the Paterson Chair in International Affairs at Carleton University. He has published on ethnic conflict, including The Ties That Divide: Ethnic Politics, Foreign Policy, and International Conflict and the coedited Intra-State Conflict, Governments, and Security: Dilemmas of Deterrence and Assurance, and on the complexity of alliance warfare in NATO in Afghanistan: Fighting Together, Fighting Alone (with David P. Auerswald).

R. William Ayres is associate dean of the Graduate School and associate professor of political science at Wright State University. He has published widely on ethnic conflict, U.S. foreign policy, and international business, including the coauthored book Carry a Chicken in Your Lap: Or Whatever It Takes to Globalize Your Business.