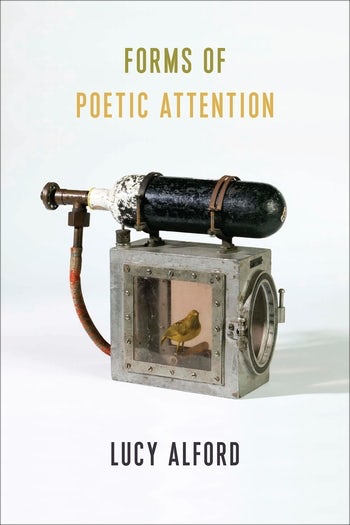 A poem is often read as a set of formal, technical, and conventional devices that generate meaning or affect. However, Lucy Alford suggests that poetic language might be better understood as an instrument for tuning and refining the attention. Identifying a crucial link between poetic form and the forming of attention, Alford offers a new terminology for how poetic attention works and how attention becomes a subject and object of poetry.

Forms of Poetic Attention combines close readings of a wide variety of poems with research in the philosophy, aesthetics, and psychology of attention. Drawing on the work of a wide variety of poets such as T. S. Eliot, Wallace Stevens, Frank O’Hara, Anne Carson, Theresa Hak Kyung Cha, Harryette Mullen, Al-Khansā’, Rainer Maria Rilke, Arthur Rimbaud, and Claudia Rankine, Alford defines and locates the particular forms of attention poems both require and produce. She theorizes the process of attention-making—its objects, its coordinates, its variables—while introducing a broad set of interpretive tools into the field of literary studies. Forms of Poetic Attention makes the original claim that attention is poetry’s primary medium, and that the forms of attention demanded by a poem can train, hone, and refine our capacities for perception and judgment, on and off the page.

Today, as our attention is nearly suffocated by the forces of commodification, Lucy Alford awakens us to the subtle powers and true breathing room that poems extend to us. Her focus ranges from Sappho to pre-Islamic poetry through the Renaissance to French and German modernism and the living poets of North America as she attends to the emergent forms of individual works and the manifold experiences of their reception. Close or far, immediate or withdrawn, vivid or abstract, with or without present subjects and objects, poets and their readers begin in perception and arrive at an ethics of care and even love. Susan Stewart, Avalon Foundation University Professor of the Humanities, Princeton University

Widely read in modern poetry and in philosophical, psychological, and sociological studies of attention, Lucy Alford has produced a boldly ambitious book with a new take on poetry in general and the sorts of things it can do. She explores how poems shape and are shaped by different kinds of attention with authority, eloquence, and sureness of touch. Jonathan Culler, author of Theory of the Lyric

Lucy Alford’s elegant and original book incisively distinguishes among the various forms of poetic attention. Fusing lyrical responsiveness with sharp-eyed analysis, it offers supple and intricate readings of attention in a stunningly transnational and transhistorical array of poems, from ancient Egypt and Greece to contemporary America. Jahan Ramazani, author of Poetry and Its Others: News, Prayer, Song, and the Dialogue of Genres

Alford proposes a truly new taxonomy of interest to any student of poetry and poetics: how do poems hold our attention? What are the separable ways in which they do so? How does a poem send us back out into the rest of the world, and when does it encourage us to go, and to stay, nowhere? These questions apply not just to particular poets, but to the whole of a literary enterprise: Alford gives us an acoustically and aesthetically sensitive way to talk about poems from varying language and periods and about the diversity within their unity. Stephanie Burt, author of Don't Read Poetry: A Book About How to Read Poems

Lucy Alford is a fellow and collegiate assistant professor at the University of Chicago, where she teaches and writes on modern and contemporary poetry and comparative poetics. Her poems have appeared in Harpur Palate, Literary Matters, the Warwick Review, Streetlight, and Atelier.