Foucault at the Movies 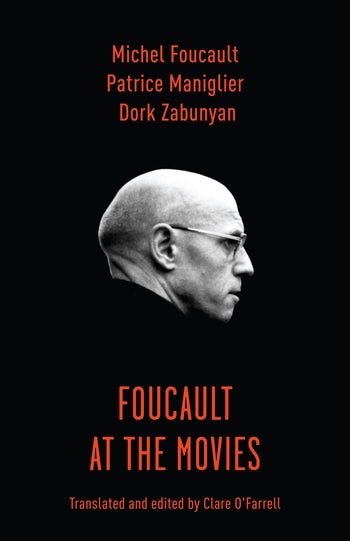 Foucault at the Movies

Michel Foucault’s work on film, although not extensive, compellingly illustrates the power of bringing his unique vision to bear on the subject and offers valuable insights into other aspects of his thought. Foucault at the Movies brings together all of Foucault’s commentary on film, some of it available for the first time in English, along with important contemporary analysis and further extensions of this work.

Patrice Maniglier and Dork Zabunyan situate Foucault’s writings on film in the context of the rest of his work as well as within a broad historical and philosophical framework. They detail how Foucault’s work directly or indirectly inspired both film critics and directors in surprising ways and discuss his ideas in relation to significant movements within film theory and practice. The book includes film reviews and discussions by Foucault as well as his interviews with the prestigious film magazine Cahiers du cinéma and other journals. Also included are his dialogues with the noted French feminist writer Hélène Cixous and film directors Werner Schroeter and René Féret. Throughout, Foucault and those he is in conversation with reflect on the relationship of film to history, the body, power and politics, knowledge, sexuality, aesthetics, and institutions of internment. Foucault at the Movies makes all of Foucault’s writings on film available to an English-speaking audience in one volume and offers detailed, up-to-date commentary, inviting us to go to the movies with Foucault.

Foucault at the Movies is an effectively translated and admirably assembled work of film scholarship and philosophical history . . . Foucault’s thoughts on film are fascinating yet also offer a more genial look at the famed philosopher. Mike McClelland, Spectrum Culture

To accept this volume's invitation 'to go to the movies with Foucault' is to find oneself ushered to a seat from which the screen ahead looks dazzlingly different. Times Literary Supplement

Here is a collection to excite the archaeological imagination. Thomas Beard, Film Comment

This volume will prove useful not only to anyone who teaches or studies Foucault, but also to those interested in Continental philosophy and film studies. Choice

Foucault at the Movies is a challenging yet satisfying read that bridges a considerable gap in film and philosophy. Well-researched, its overarching strength is the location of film within Foucault’s archaeological and genealogical project. This book will prove to be pivotal reading for anyone interested in the intersections of film-philosophy and film history and will doubtlessly titillate Foucault scholars interested in a synthesis of these lesser-known writings. Kyler Chittick, Foucault Studies

Like all of his great interviews, Foucault at the Movies presents Foucault speaking in his own voice. We find Foucault saying that “the art of living” means that psychology must be killed; that the body must be dismantled; that memory must function without remembering; and that passion is more interesting than love. Foucault at the Movies is an invaluable addition to our understanding of Foucault’s thought. Leonard Lawlor, Penn State University

Michel Foucault’s writings have led many of us to think differently. Do his observations on film introduce us to fresh ways of seeing? If philosophers have primarily studied discourses of truth, perhaps they need to give equal consideration to the overpowering fabrication of regimes of fiction, especially those of our cinematic culture. Is Fascism comprehensible apart from the images of Leni Riefenstahl’s Triumph of the Will? Foucault at the Movies is a stimulating engagement with a frequently overlooked contribution from the French thinker. James Bernauer, Boston College

Translator’s Preface, by Clare O’Farrell
Introduction: Michel Foucault’s Cut, by Patrice Maniglier and Dork Zabunyan
Part 1. Foucault and Film: A Historical and Philosophical Encounter
1. What Film Is Able to Do: Foucault and Cinematic Knowledge, by Dork Zabunyan
2. Versions of the Present: Foucault’s Metaphysics of the Event Illuminated by Cinema, by Patrice Maniglier
Part 2. Michel Foucault on Film
3. Film, History, and Popular Memory
4. Marguerite Duras: Memory Without Remembering
5. Paul’s Story: The Story of Jonah
6. The Nondisciplinary Camera Versus Sade
7. The Asylum and the Carnival
8. Crime and Discourse
9. The Return of Pierre Rivière
10. The Dull Regime of Tolerance
11. The Four Horsemen of the Apocalypse
12. Werner Schroeter and Michel Foucault in Conversation
Appendix: Foucault at the Movies—a Program of Films
Notes
Bibliography
Index

Michel Foucault, a French historian, philosopher, and social theorist, was one of the most important figures in twentieth-century thought. His work has had enormous influence throughout the humanities and social sciences.

Patrice Maniglier is senior lecturer in the department of philosophy at the University of Paris–Nanterre.

Dork Zabunyan is professor of film studies at the University of Paris–8.

Clare O’Farrell is senior lecturer in the Faculty of Education at the Queensland University of Technology. Her books include Foucault: Historian or Philosopher? (1989) and Michel Foucault (2005).