Poems, Stories, Comics, a Play, and an Interview 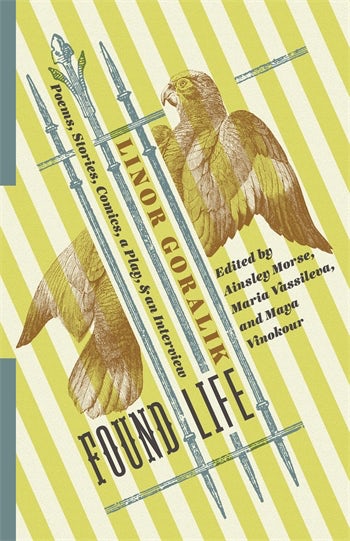 Poems, Stories, Comics, a Play, and an Interview

One of the first Russian writers to make a name for herself on the Internet, Linor Goralik writes conversational short works that conjure the absurd in all its forms, reflecting post-Soviet life and daily universals. Her mastery of the minimal, including a wide range of experiments in different forms of micro-prose, is on full display in this collection of poems, stories, comics, a play, and an interview, here translated for the first time.

In Found Life, speech, condensed to the extreme, captures a vivid picture of fleeting interactions in a quickly moving world. Goralik's works evoke an unconventional palette of moods and atmospheres—slight doubt, subtle sadness, vague unease—through accumulation of unexpected details and command over colloquial language. While calling up a range of voices, her works are marked by a distinct voice, simultaneously slightly naïve and deeply ironic. She is a keen observer of the female condition, recounting gendered tribulations with awareness and amusement. From spiritual rabbits and biblical zoos to poems about loss and comics about poetry, Goralik's colorful language and pervasive dark comedy capture the heights of ridiculousness and the depths of grief.

By turns entertaining, quixotic and unnerving, this sampling of the prolific writer’s many voices and styles is something you will want to leave lying around to dip into when you have a spare moment, or just before nodding off to bed, to seed your dreamscape. Russian Life

The most engaging pieces, despite their brevity, require concentration, but whatever your attention span, you'll be rewarded by miniatures such as this: 'The signature taste of a gun barrel.' Anna Aslanyan, Times Literary Supplement

A welcome collection from a writer worth hearing more from—so translators get busy. Kirkus Reviews

Linor Goralik is a Renaissance woman of our own day, writing (and drawing!) in a wide range of genres, all with sharp intelligence. Her writing is fresh and thought-provoking, with both profound insight and deadpan humor. The numerous translators allow exploration of different aspects of Goralik’s voice, so that this selection of work offers the reader a wonderful variety and versatility. A beautiful and important book! Sibelan Forrester, Swarthmore College

Linor Goralik has a perfect ear for the wander and wonder of ordinary speech, for the way the weirdness of human language conveys the weirdness of human experience. In turn hilarious and heart-rending, her fictions and poems bristle with epiphanies, with jolts of comprehension and, just as commonly, of vertiginous incomprehension. A literary descendant of Daniil Kharms, the conceptualists, and Chekhov, this transnational writer-ventriloquist describes a world of multiple realities, including that of the supernatural, but she is also painstakingly precise in her depictions of male and female behavior in post-Soviet space. The editors and translators are to be praised for, among many other things, finding the idiomatic and colloquial American English to convincingly express the alive Russian of the original. Eugene Ostashevsky, author of The Pirate Who Does Not Know the Value of Pi

Linor Goralik (1975-) is an award-winning contemporary Russian writer of flash fiction, poetry, essays, fairy tales, theater, and more. Her boundary-pushing works include fourteen books and dozens of other print and electronic publications.

Ainsley Morse is the cotranslator (with Bela Shayevich) of I Live I See: The Collected Poems of Vsevolod Nekrasov and Kholin 66, as well as Anatomical Theater by Andrei Sen-Senkov (with Peter Golub).

Maria Vassileva is a Ph.D. candidate in Slavic languages and literatures at Harvard University.

Maya Vinokour is a Faculty Fellow in the Department of Russian and Slavic Studies at New York University.