From Head Shops to Whole Foods

The Rise and Fall of Activist Entrepreneurs 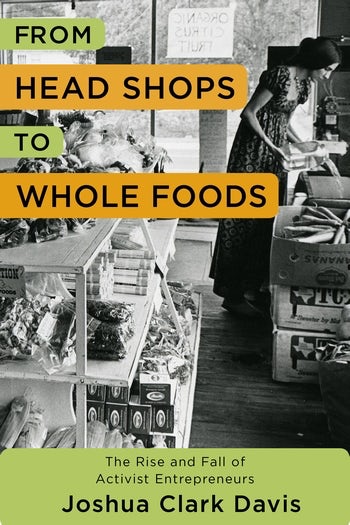 From Head Shops to Whole Foods

The Rise and Fall of Activist Entrepreneurs

In the 1960s and ’70s, a diverse range of storefronts—including head shops, African American bookstores, feminist businesses, and organic grocers—brought the work of the New Left, Black Power, feminism, environmentalism, and other movements into the marketplace. Through shared ownership, limited growth, and democratic workplaces, these activist entrepreneurs offered alternatives to conventional profit-driven corporate business models. By the middle of the 1970s, thousands of these enterprises operated across the United States—but only a handful survive today. Some, such as Whole Foods Market, have abandoned their quest for collective political change in favor of maximizing profits.

Vividly portraying the struggles, successes, and sacrifices of these unlikely entrepreneurs, From Head Shops to Whole Foods writes a new history of social movements and capitalism by showing how activists embraced small businesses in a way few historians have considered. The book challenges the widespread but mistaken idea that activism and political dissent are inherently antithetical to participation in the marketplace. Joshua Clark Davis uncovers the historical roots of contemporary interest in ethical consumption, social enterprise, buying local, and mission-driven business, while also showing how today’s companies have adopted the language—but not often the mission—of liberation and social change.

Rigorously researched and carefully written, From Head Shops to Whole Foods uncovers one of the most unrecognized groups of the American activists in the ’60s and ’70s—activist entrepreneurs. They were widely influential then and remain so today. This book is critical for understanding contemporary companies that celebrate ethical practices and social change. Ibram X. Kendi, American University, author of Stamped from the Beginning: The Definitive History of Racist Ideas in America, winner of the 2016 National Book Award for Nonfiction

From Head Shops to Whole Foods offers an important look at the afterlife of the direct action campaigns of the 1960s, recasting the history of small business as a desegregated history of American politics. With a critical eye and swift prose, Davis’s book recognizes the centrality of entrepreneurial politics as an expression of—and in the making of—American political culture, writ long and writ large. Truly exceptional. N. D. B. Connolly, Johns Hopkins University and cohost of the podcast BackStory

Davis has rewritten the sixties. His compelling account reveals how sixties radicals and rebels fought to co-opt capitalism to create a more just, diverse, and free marketplace. They lost more battles than they won, but their victories continue to shape our world. David Farber, University of Kansas, author of The Age of Great Dreams

Joshua Clark Davis’s new book is a brilliant tour through a history yet untold, illuminating the fascinating past of a contemporary marketplace that eagerly brands itself as countercultural but which has largely abandoned—even as it has been irreversibly shaped by—the activist politics that inspired it. Natalia Mehlman Petrzela, The New School For Social Research

[From Head Shops to Whole Foods] avoids the stilted language of the academy to produce deft descriptions of African-American bookstores, the head shops of the drug counterculture, the businesses of second-wave feminism, and the arrival of health-food stores and their corporate apotheosis. Using solid, representative examples, Davis traces each vein of activist entrepreneurialism to show how activists’ original intentions were frustrated, altered, or abandoned. Publishers Weekly

Scholarly in tone and approach but accessible and of interest to students of business history as well as to budding entrepreneurs. Kirkus Reviews

[From Head Shops to Whole Foods] makes a valuable contribution to the study of American capitalism and consumerism. It reveals some well-worn paths in American history but in new ways, while also establishing some of the ironic origins of today’s corporate citizens. The Metropole: The Official Blog of the Urban History Association

[Joshua Clark Davis] has written about one of the most important legacies of activism in the 1960s: the combination of activist politics with the entrepreneurial spirit. . . . With accessible prose, considerable research in various archives, and an intriguing analysis of the combination of capitalism and radicalism, From Head Shops to Whole Foods is a must-read for many of our readers at S-USIH. Robert J. Greene II, Society for U.S. Intellectual History {S-USIH)

An extremely welcome and insightful addition to the deepening historiography of 1960s-era activism. . . . This history helps us imagine alternative business structures, economic goals, and definitions of success within the consumer capitalist model. As a new era of activist entrepreneurs swells in our own historical moment, From Head Shops to Whole Foods offers quite a bit of useful food for thought. Patrick Jones, H-1960s

Business is not the first thing that comes to mind when one thinks about the countercultural movements of the 1960s. But in From Head Shops to Whole Foods Joshua Clark Davis makes a compelling case that the businesses he examines provide a useful vantage point on the counterculture while also allowing a new perspective on today’s business. Ross Bassett, Journal of American History

Davis is an excellent storyteller, capturing both the romance of the various movements and their passionate activist founders. Choice

From Head Shops to Whole Foods enriches the historiography of Sixties-era social movements by providing what should become the major narrative of activist business activities during the long Sixties. . . . The most important books on the American counterculture use the counterculture as evidence of broader structural changes, charting the intersection of countercultures with marketing, digital life, environmentalism, spirituality, gender, citizenship, or drugs. From Head Shops to Whole Foods follows in that tradition. By tracing how countercultural values shaped a humane business culture and by insisting on the seriousness of ventures that aimed at sustainable development, Davis has written the most important book on the counterculture to be published this decade. Blake Slonecker, The Sixties: A Journal of History, Politics, and Culture

An ambitious and widely researched text. . . . Davis’s research is deep and thorough. He brings together several movements that are often approached in isolation and provides the lens of business and entrepreneurship. This is no small contribution to several historiographies. There is much to learn from this text. Laura Warren Hill, Enterprise & Society

Acknowledgments
List of Abbreviations
Introduction
1. Activist Business: Origins and Ideologies
2. Liberation Through Literacy: African American Bookstores, Black Power, and the Mainstreaming of Black Books
3. The Business of Getting High: Head Shops, Countercultural Capitalism, and the Battle Over Marijuana
4. The "Feminist Economic Revolution": Businesses in the Women's Movement
5. Natural Foods Stores: Environmental Entrepreneurs and the Perils of Growth
6. Perseverance and Appropriation: Activist Business in the Twenty-First Century
Conclusion
Notes
Index

Joshua Clark Davis is assistant professor of history at the University of Baltimore.