From Judgment to Passion 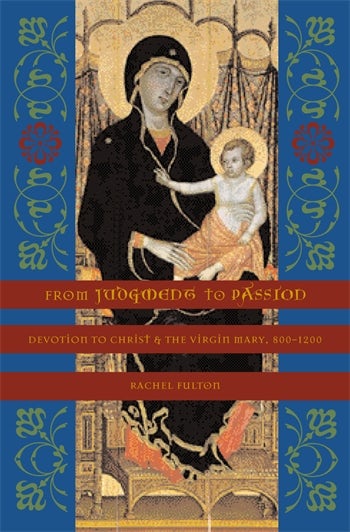 From Judgment to Passion

Magisterial in style and comprehensive in scope, From Judgment to Passion is the first systematic attempt to explain the origins and initial development of European devotion to Christ in his suffering humanity and Mary in her compassionate grief. Rachel Fulton examines liturgical performance, doctrine, private prayer, scriptural exegesis, and art in order to illuminate and explain the powerful desire shared by medieval women and men to identify with the crucified Christ and his mother.

The book begins with the Carolingian campaign to convert the newly conquered pagan Saxons, in particular with the effort to explain for these new converts the mystery of the Eucharist, the miraculous presence of Christ's body at the Mass. Moving on to the early eleventh century, when Christ's failure to return on the millennium of his Passion (A.D. 1033) necessitated for believers a radical revision of Christian history, Fulton examines the novel liturgies and devotions that arose amid this apocalyptic disappointment. The book turns finally to the twelfth century when, in the wake of the capture of Jerusalem in the First Crusade, there occurred the full flowering of a new, more emotional sensibility of faith, epitomized by the eroticism of the Marian exegesis of the Song of Songs and by the artistic and architectural innovations we have come to think of as quintessentially high medieval.

In addition to its concern with explaining devotional change, From Judgment to Passion presses a second, crucial question: How is it possible for modern historians to understand not only the social and cultural functions but also the experience of faith—the impulsive engagement with the emotions, sometimes ineffable, of prayer and devotion? The answer, magnificently exemplified throughout this book's narrative, lies in imaginative empathy, the same incorporation of self into story that lay at the heart of the medieval effort to identify with Christ and Mary in their love and pain.

Fulton's sophisticated analysis of medieval prayer and liturgy reexamines the medieval conceptions of judgement, passion and salvation, and presents valuable new insights into the developements of the cult of the suffering Jesus and the compassionate Virgin Mary. This is truly an important book. Choice

This intellectual tour de force... paints in breathtaking strokes a gorgeous tapestry of the loyal devotion to the Man of Sorrows and the Mater Dolorosa. Publishers Weekly

The book offers remarkable depth as well as breadth in a most commendable manner. Library Journal

Fulton in this extraordinary book reconstructs the early history of devotion to the human and, ultimately, suffering Christ, from late antiquity through the age of Anselm of Canterbury, Peter Abaelard, Bernard of Clairvaux, and Peter Damian.... A work of extraordinary erudition, this book revolutionizes our knowledge of medieval spirituality. International Review of Biblical Studies

This is a courageous book. Fulton is party to no trend, faction, or fashion...I have not read a book in many years that taught me so much or moved me so deeply as this one. Thomas F. X. Noble, Theological Studies

Of interest to medievalists across the disciplines of history, art history, religious studies, and literature. Wanda Zemler-Cizewski, Marquette University, Speculum

Fulton's clarity of thought and thoroughness of explication make her study as compelling as it is challenging. Marsha L. Dutton, Catholic Historical Review

One of the most subtle, moving, and important books in medieval religious history published over the last several decades. Kevin Madigan, History of Religions

A rich and stimulating study which stands in its own right and also offers potential avenues for future work. Sarah Hamilton, History: The Journal of the Historical Society

This is an important book that will continue to be read for very many years. Srah Jane Boss, American Historical Review

Winner, 2003 Journal of the History of Ideas

Rachel Fulton is asssociate professor of history at the University of Chicago. She has held fellowships from the American Council of Learned Societies and the Lilly Endowment, and she has been a Fellow at the National Humanities Center, where she began work on this book. Her current project is a study of the cognitive and ritual making of prayer in the monastic culture of the medieval West.