From Resilience to Revolution 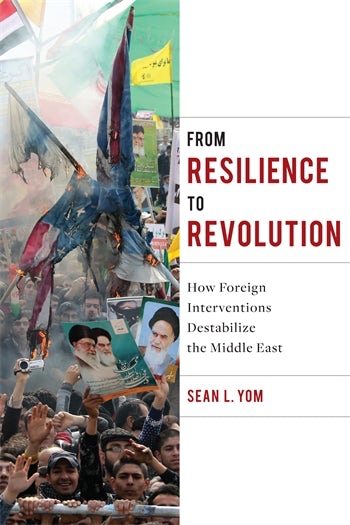 From Resilience to Revolution

Based on comparative historical analyses of Iran, Jordan, and Kuwait, Sean L. Yom examines the foreign interventions, coalitional choices, and state outcomes that made the political regimes of the modern Middle East. A key text for foreign policy scholars, From Resilience to Revolution shows how outside interference can corrupt the most basic choices of governance: who to reward, who to punish, who to compensate, and who to manipulate.

As colonial rule dissolved in the 1930s and 1950s, Middle Eastern autocrats constructed new political states to solidify their reigns, with varying results. Why did equally ambitious authoritarians meet such unequal fates? Yom ties the durability of Middle Eastern regimes to their geopolitical origins. At the dawn of the postcolonial era, many autocratic states had little support from their people and struggled to overcome widespread opposition. When foreign powers intervened to bolster these regimes, they unwittingly sabotaged the prospects for long-term stability by discouraging leaders from reaching out to their people and bargaining for mass support—early coalitional decisions that created repressive institutions and planted the seeds for future unrest. Only when they were secluded from larger geopolitical machinations did Middle Eastern regimes come to grips with their weaknesses and build broader coalitions.

A valuable work that makes a strong contribution to the study of Middle Eastern politics. Michael Herb, Georgia State University

This outstanding work of comparative political history shows the complex interaction between the global and the local and the enduring effects of choices made during constitutive moments in state formation. Washington Post - 15 Best Middle East Books

[A] richly theoretical analysis, elegantly written and supported by the most recent comparative political literature.... This is a compelling study not just for Middle Eastern studies but also for comparative politics in general. Choice

A very good book. It is well written, researched, and argued, and it provides a compelling explanation of outcomes that remain highly salient to both political theorists and practitioners. Middle East Journal

Impressive.... Yom's nuanced transnational account broadens our understanding of regime durability in the twentieth and twenty-first centuries. Journal of Politics

This book reacquaints us with key points of national crisis and decision-making in three important, yet different, states whose past and futures continue to have direct relevance to our scholarly understanding of the political landscape of the Middle East, as well as to current US policy. Heidi Elizabeth Lane, US Naval War College, Bustan- The Middle East Book Review

A Note on Transliteration and Interviews
Acknowledgments
1. The Argument and the Cases
2. Coalitions, State-Building, and Geopolitical Mediation
3. Conflict and Compromise in Kuwait
4. Inclusion and Stability in a Populist Autocracy
5. Cliency and Coercion in Iran
6. Exclusionary Politics and the Revolutionary End
7. A Conflict Interrupted in Jordan
8. Recurrent Tensions and Tenuous Survival Under Hashemite Rule
9. The Geopolitical Origins of Durable Political Order
Notes
Bibliography
Index

Sean L. Yom is assistant professor of political science at Temple University. His research focuses on the comparative politics of the Middle East, especially the dynamics and effects of authoritarianism, democracy, and U.S. foreign policy.