On the Semantics of Historical Time

Reinhart Koselleck. Translated and with an introduction by Keith Tribe 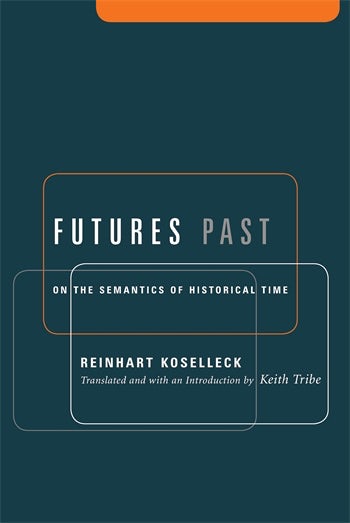 On the Semantics of Historical Time

Reinhart Koselleck. Translated and with an introduction by Keith Tribe

Modernity in the late eighteenth century transformed all domains of European life -intellectual, industrial, and social. Not least affected was the experience of time itself: ever-accelerating change left people with briefer intervals of time in which to gather new experiences and adapt. In this provocative and erudite book Reinhart Koselleck, a distinguished philosopher of history, explores the concept of historical time by posing the question: what kind of experience is opened up by the emergence of modernity? Relying on an extraordinary array of witnesses and texts from politicians, philosophers, theologians, and poets to Renaissance paintings and the dreams of German citizens during the Third Reich, Koselleck shows that, with the advent of modernity, the past and the future became 'relocated' in relation to each other.The promises of modernity -freedom, progress, infinite human improvement -produced a world accelerating toward an unknown and unknowable future within which awaited the possibility of achieving utopian fulfillment. History, Koselleck asserts, emerged in this crucial moment as a new temporality providing distinctly new ways of assimilating experience. In the present context of globalization and its resulting crises, the modern world once again faces a crisis in aligning the experience of past and present. To realize that each present was once an imagined future may help us once again place ourselves within a temporality organized by human thought and humane ends as much as by the contingencies of uncontrolled events.

"Koselleck turns the procedures of 'conceptual historiography' to the study of the concept of history itself, (providing) original, erudite, and illuminating insights into concepts that have informed the modern idea of historical being: event, chance, progress, revolution, modernity... Koselleck's work augurs a new era in the conceptualization not only of what 'history' means to Western culture but also of what Western culture means for 'history.'" Hayden White, American Historical Review

Introduction, by Keith Tribe
Part I. On the Relation of Past and Future in Modern History
1. Modernity and the Planes of Historicity
2. Historia Magistra Vitae: The Dissolution of the Topos Into the Perspective of a Modernized Historical Process
3. Historical Criteria of the Modern Concept of Revolution
4. Historical Prognosis in Lorenz von Stein's Essay on the Prussian Constitution
Part II. Theory and Method of the Historical Determination of Time
5. Begriffsgeschichte and Social History
6. History, Histories, and Formal Time Structures
7. Representation, Event, and Structure
8. Chance as Motivational Trace in Historical Writing
9. Perspective and Temporality: A Contribution to the Historiographical Exposure of the Historical World
Part III. Semantic Remarks on the Mutation of Historical Experience
10. The Historical-Political Semantics of Asymmetric Counterconcepts
11. On the Disposability of History
12. Terror and Dream: Methodological Remarks on the Experience of Time During the Third Reich
13. Neuzeit: Remarks on the Semantics of Modern Concepts of Movement
15. Space of Experience and Horizon of Expectation: Two Historical Categories
Notes

Reinhart Koselleck, now retired, was previously professor of historical theory at the University of Bielefeld, Germany. He is the author of The Practice of Conceptual History and Critique and Crisis.Keith Tribe was Reader in Economics at Keele University, UK, until 2002. He is now a private scholar and rowing coach at the King's School, Worcester.