The Journey of Daoist Priestesses in Tang China 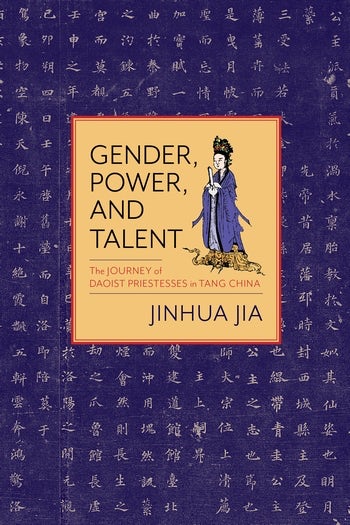 The Journey of Daoist Priestesses in Tang China

During the Tang dynasty (618–907), changes in political policies, the religious landscape, and gender relations opened the possibility for Daoist women to play an unprecedented role in religious and public life. Women, from imperial princesses to the daughters of commoner families, could be ordained as Daoist priestesses and become religious leaders, teachers, and practitioners in their own right. Some achieved remarkable accomplishments: one wrote and transmitted texts on meditation and inner cultivation; another, a physician, authored a treatise on therapeutic methods, medical theory, and longevity techniques. Priestess-poets composed major works, and talented priestess-artists produced stunning calligraphy.

In Gender, Power, and Talent, Jinhua Jia draws on a wealth of previously untapped sources to explain how Daoist priestesses distinguished themselves as a distinct gendered religious and social group. She describes the life journey of priestesses from palace women to abbesses and ordinary practitioners, touching on their varied reasons for entering the Daoist orders, the role of social and religious institutions, forms of spiritual experience, and the relationships between gendered identities and cultural representations. Jia takes the reader inside convents and cloisters, demonstrating how they functioned both as a female space for self-determination and as a public platform for both religious and social spheres. The first comprehensive study of the lives and roles of Daoist priestesses in Tang China, Gender, Power, and Talent restores women to the landscape of Chinese religion and literature and proposes new methodologies for the growing field of gender and religion.

Written by a rising leader in Chinese religious studies applying an interdisciplinary approach that combines religious, literary, and gender studies, and searching through all available sources and recovering many new texts, Gender, Power, and Talent examines both the conventional and ‘unconventional’ roles played by Tang Daoist priestesses in the historical context of the Tang dynasty. Nanxiu Qian, Rice University

Gender, Power, and Talent argues that Daoist women of medieval China played an important role in the religion and in the society of the time; that their emergence as a major social force is unprecedented in Chinese history; and that they developed a new form of identity both as women and as Daoists. The gender-critical perspective of the book together with its meticulous historical research makes it a unique contribution to the field. Livia Kohn, Boston University

Elite Daoist nuns of the Tang dynasty used to have a scandalous reputation. Jinhua Jia does them justice; the gossip is accounted for, but more important elements are added to the picture: the uneasy invention of Daoist monasticism, the debates around female religiosity and poetic expression, and the rise of early modern self-cultivation practices. This gendered history of medieval Daoism is a major addition to our understanding of Chinese religious cultures. Vincent Goossaert, Université PSL, École Pratique des Hautes Études

Using previously unknown mortuary inscriptions, rare Dunhuang manuscripts, and a broad range of received texts, Jia offers a revealing panorama of women's religious practices from medieval China. This study of Tang Daoist priestesses from various backgrounds brings the lives of these many remarkable women out of the shadows. Cultural and social history at its best. Paul W. Kroll, University of Colorado, Boulder

By making meticulous use of important new sources and re-viewing older ones with an informed and insightful gender-critical eye, Jinhua Jia has admirably succeeded in finally releasing Tang dynasty Daoist women from the traditional stereotypes, whether romantically idealistic or moralistically censorious, that have so long obscured their significant accomplishments in such diverse areas as scriptural exegesis, ritual practice, medicine, literature, and the arts. Beata Grant, Washington University in St. Louis

[Gender, Power, and Talent's] contributions to the scholarship on Chinese religion, literature, and women studies make it a useful reference for scholars and students interested in related areas. Overall, it is a worthy beginning to what we hope will be increased emphasis on women and Daoism, and it should stimulate further research on Daoism and gender studies. Yue Wu, Chinese Literature: Essays, Articles, Reviews

An incredibly important book for both scholars and students, one which will remain for years to come a pivotal resource for classrooms and related studies. Reading Religion

List of Figures and Tables
Acknowledgments
List of Abbreviations
Introduction
1. The Rise of Daoist Priestesses as a Gendered Religio-Social Group
2. Destiny and Power of the Ordained Royal Women
3. Religious Leadership, Practice, and Ritual Function
4. Liu Moran and the Daoist Theory of Inner Cultivation
5. Longevity Techniques and Medical Theory: The Legacy of Hu Yin
6. The Yaochi ji and Three Daoist Priestess-Poets
7. Unsold Peony: The Life and Poetry of the Priestess-Poet Yu Xuanji
Conclusion
Appendix: Du Guangting and the Hagiographies of Tang Daoist Women
Notes
Bibliography
Index

Jinhua Jia is a professor in the Department of Chinese Culture at the Hong Kong Polytechnic University. She is the author of The Hongzhou School of Chan Buddhism in Eighth- Through Tenth-Century China (2006) and coeditor of Gendering Chinese Religion: Subject, Identity, and Body (2014).