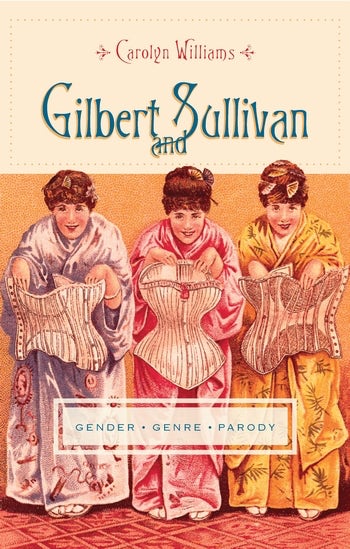 Long before the satirical comedy of The Daily Show and The Colbert Report, the comic operas of W. S. Gilbert and Arthur Sullivan were the hottest send-ups of the day's political and cultural obsessions. Gilbert and Sullivan's productions always rose to the level of social commentary, despite being impertinent, absurd, or inane. Some viewers may take them straight, but what looks like sexism or stereotype was actually a clever strategy of critique. Parody was a powerful weapon in the culture wars of late-nineteenth-century England, and with defiantly in-your-face sophistication, Gilbert and Sullivan proved that popular culture can be intellectually as well as politically challenging.

Carolyn Williams underscores Gilbert and Sullivan's creative and acute understanding of cultural formations. Her unique perspective shows how anxiety drives the troubled mind in the Lord Chancellor's "Nightmare Song" in Iolanthe and is vividly realized in the sexual and economic phrasing of the song's patter lyrics. The modern body appears automated and performative in the "Junction Song" in Thespis, anticipating Charlie Chaplin's factory worker in Modern Times. Williams also illuminates the use of magic in The Sorcerer, the parody of nautical melodrama in H.M.S. Pinafore, the ridicule of Victorian aesthetic and idyllic poetry in Patience, the autoethnography of The Mikado, the role of gender in Trial by Jury, and the theme of illegitimacy in The Pirates of Penzance. With her provocative reinterpretation of these artists and their work, Williams recasts our understanding of creativity in the late nineteenth century.

Rich, challenging, irritating, inspiring, provocative, just what one wants in a new G&S study, this is a worthwhile albeit tough read. CHOICE

Williams substantive study is all the more praiseworthy because her biting insights into gender and sexuality, sharpened through the lens of contemporary critical theory, are tucked within what could pass as a much more staid study of Gilbert and Sullivan. Josephine Lee, Nineteenth Century Gender Studies

Unmodified rapture should best describe the scholarly reponse to this exciting contribution to a broad swath of disciplines... Victorian Studies

this book will be an important reference point for future discussions of Gilbert and Sullivan, gender, and the Victorian stage. Benjamin D. O'Dell, English Literature in Transition, 1880-1920

An outstanding pick... this is a recommendation for any college-level course in Gilbert and Sullivan, and for readers who would receive a fine reinterpretation of their works and impact. Midwest Book Review

List of Illustrations
Preface
Acknowledgments
Introduction
Part I. Genres
1. Outmoding Classical Extravaganza, Englishing Opéra Bouffe: Thespis
2. Gender in the Breach: Trial by Jury
3. English Magic, English Intoxication: The Sorcerer
4. "Never Mind the Why and Wherefore": The Parody of Nautical Melodrama
in H.M.S. Pinafore
5. Recollecting Illegitimacy: The Pirates of Penzance
Part II. Genders
6. New Light on Changing Gender Norms: Patience
7. Transforming the Fairy Genres: Women on Top in Iolanthe
8. War Between the Sexes: Princess Ida
Part III. Cultures
9. Estrangement and Familiarity: The Mikado
10. Mixing It Up: Gothic and Nautical Melodrama in Ruddigore
11. The Past Is a Foreign Country: The Yeomen of the Guard
12. Imaginary Republicanism: The Gondoliers
13. Capitalism and Colonialism: Utopia, Limited
14. Continental Recollections: The Grand Duke
After Gilbert and Sullivan: The Momentum of Parody
Notes
Index

Carolyn Williams is professor of English at Rutgers University, where she teaches courses on Victorian literature, theater, and culture. She is the author of Transfigured World: Walter Pater's Aesthetic Historicism, as well as numerous essays and articles.