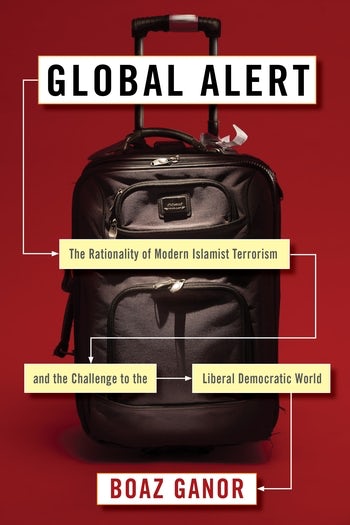 Many associate terrorism with irrational behavior and believe only lunatics could perpetuate such horrific acts. Global Alert debunks this myth by anatomizing the rationale behind modern terrorism. It draws a distinct picture of its root and instrumental causes and plots the different stages of a terrorist attack, from indoctrination and recruitment to planning, preparation, and launch.

Global Alert also exposes the measured exploitation of democratic institutions by terrorists to further their goals. Despite its strong capabilities and extensive resources, the modern liberal-democratic state is nevertheless subject to the rules of war, which partially restrict the state's ability to operate and maneuver. Boaz Ganor shows how terrorist organizations exploit these values to paralyze or neutralize the states they oppose. In outlining this new "hybrid" terrorist organization and its activity in both the military–terrorist arena and the political–welfare arena, Ganor advances an international doctrine for governing military operations between state and nonstate actors as part of a new type of armed conflict termed "multidimensional warfare."

In <i>Global Alert</i> Boaz Ganor, a true expert in the field of terrorism and counter-terrorism, enlightens readers of the Israeli–Palestinian reality, which he understands flawlessly. This book is a must read for researchers, academics, practitioners, and decision makers, who will find a comprehensive strategic doctrine and operational approach to counter this plague of modern times. Judge Jean-Louis Bruguière, former vice president of the Paris Court of Serious Claims

Boaz Ganor, who has dealt with the phenomenon of Islamic terrorism for more than twenty years and is rightly considered an international authority on the subject, deals with the fundamental issues of radical Islam, clarifies them, and translates them for the Western conceptual world of the twenty-first century. There is no doubt that this book will serve as a significant contribution to a better understanding of the conflict that will accompany human society for many years to come. Shabtai Shavit, former director of the Mossad

In <i>Global Alert </i>Boaz Ganor addresses the fundamental dilemmas that confront the liberal democratic state in combating contemporary terrorist groups. He makes the point that terrorism is not mindless violence. Today’s terrorist leaders think strategically. They have benefited from decades of experience, observing their predecessors, enabling them to create new kinds of organizations and formulate strategies that exploit the disadvantages of the democratic state. Intellectually, states have not kept up, and radical rethinking is in order. Global Alert starts us in a new direction. Brian Jenkins, senior adviser to the president of the RAND Corporation

When it comes to outstanding informed analytical and policy-oriented scholarship on counterterrorism in the context of open societies, the work of Boaz Ganor is plainly and simply inescapable for academics, politicians, security practitioners, and concerned citizens. Fernando Reinares, professor of politics and security studies, Universidad Rey Juan Carlos, and senior analyst on international terrorism, Elcano Royal Institute, Madrid

I highly recommend that anyone interested in the subject of combating the plague of terrorism today read Ganor's short but punchy book. Jerusalem Post

Global Alert is a must read for national security professionals, political leaders, academics, and any citizens who simply want to better understand the rationale and threat of modern Islamist terrorism. Randolph Lake, H-War

Ganor’s text is one that will likely invite spirited debate. Terrorism and Political Violence