God and Man in Tehran 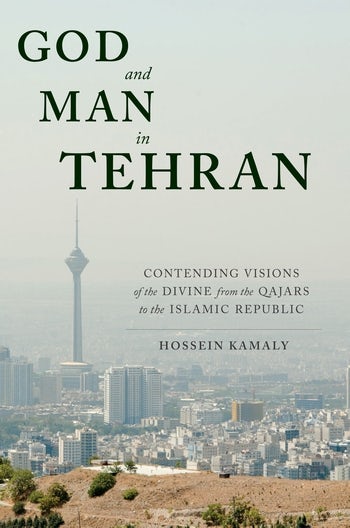 God and Man in Tehran

In God and Man in Tehran, Hossein Kamaly explores the historical processes that have made and unmade contending visions of God in Iran’s capital throughout the past two hundred years. Kamaly examines how ideas of God have been mobilized, contested, and transformed, emphasizing how notions of the divine have given shape to and in turn have been shaped by divergent conceptualizations of nature, reason, law, morality, and authority.

The book analyzes official government policies, modern textbooks, and university curricula; popular beliefs and ritual practices; and philosophical and juridical attitudes toward theological questions in traditional institutions. Kamaly considers continuity and change in religiosity under the Qajar and Pahlavi dynasties; the significance of outbreaks of messianic expectations; why a modernizing nation took a sudden turn toward state religiosity; and how the Islamic Republic deploys visions of God against foreign enemies and domestic critics. Beyond the majority Shia Muslim population, the book includes minority and suppressed voices. With a focus on the diversity of ideas of the divine, God and Man in Tehran offers a novel perspective on the intellectual movements that have shaped Iranian modernity.

A masterful mapping of the intellectual and spiritual currents that roiled Iran's capital for a century and a half before bursting forth in the Iranian Revolution. Richard Bulliet, Columbia University

From the dawning of modernity around 1800 to the present, God and Man in Tehran expertly describes the diversity of reactions among Iranians to ideas in both their own tradition of learning and imported learning from the western world. Kamaly’s extremely wide reading in primary sources in Persian, Arabic, French, and other languages enables him to describe these reactions in a wide range of cultural modes from poetry to scientific texts. Roy Mottahedeh, Harvard University

Hossein Kamaly is a scholar of unrivaled learning, a writer of quiet elegance. In his God and Man in Tehran he has written an exquisite rarity: An urban history of Almighty God. An earthly theology emerges from his capable hands that will make you hear the voice of God from the elegant urbanity of a nation. An utter delight to read! Hamid Dabashi, Columbia University

Hossein Kamaly's new book God and Man in Tehran represents a major event that should be and can be read profitably by those wishing to make sense of the intellectual roots of modern Iran as well as working through the dynamics and complexities of the Safavid period. Hikmat: Texts, Translations, Thoughts, Philosophy, Literature, Shi'i Islam, Urdu, Persian, Iran, India

The book is well written and researched, and will be an important resource for those interested in Islam in Iran. Choice

A truly admirable synthesis of intellectual and religious history. Journal of Religious History

Preface
Acknowledgments
On Transliteration and Dates
1. O God, O Heaven, O Nature
2. Mediatory Theology and Its Discontents
3. God with Us
4. The Law: God’s and Man’s
5. Falsafeh and the Madraseh
6. Sufism Returns, and with a Vengeance
7. Varieties of Skeptical Expression
Appendix: Electronic Resources
Notes
References
Index

Hossein Kamaly is a scholar of the Middle East, focusing on the history of ideas. He has taught at Barnard College and Columbia University and lives in Larchmont, NY.