From Heidegger to Marx 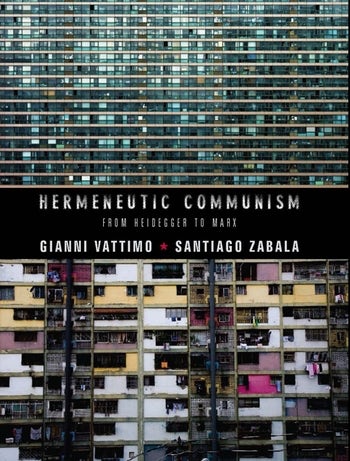 From Heidegger to Marx

Having lost much of its political clout and theoretical power, communism no longer represents an appealing alternative to capitalism. In its original Marxist formulation, communism promised an ideal of development, but only through a logic of war, and while a number of reformist governments still promote this ideology, their legitimacy has steadily declined since the fall of the Berlin wall.

Separating communism from its metaphysical foundations, which include an abiding faith in the immutable laws of history and an almost holy conception of the proletariat, Gianni Vattimo and Santiago Zabala recast Marx's theories at a time when capitalism's metaphysical moorings—in technology, empire, and industrialization—are buckling. While Michael Hardt and Antonio Negri call for a return of the revolutionary left, Vattimo and Zabala fear this would lead only to more violence and failed political policy. Instead, they adopt an antifoundationalist stance drawn from the hermeneutic thought of Martin Heidegger, Jacques Derrida, and Richard Rorty.

Hermeneutic communism leaves aside the ideal of development and the general call for revolution; it relies on interpretation rather than truth and proves more flexible in different contexts. Hermeneutic communism motivates a resistance to capitalism's inequalities yet intervenes against violence and authoritarianism by emphasizing the interpretative nature of truth. Paralleling Vattimo and Zabala's well-known work on the weakening of religion, Hermeneutic Communism realizes the fully transformational, politically effective potential of Marxist thought.

Hermeneutic Communism is much more than a beautifully written essay in political philosophy, reaching from ontological premises to concrete political analyses: it provides a coherent communist vision from the standpoint of Heideggerian postmetaphysical hermeneutics. All those who criticize postmodern 'weak thought' for its inability to ground radical political practice will have to admit their mistake—Gianni Vattimo and Santiago Zabala demonstrate that weak thought does not mean weak action but is the very resort of strong radical change. This is a book that everyone who thinks about radical politics needs like the air he or she breathes! Slavoj iek, author of Living in the End

Hermeneutic Communism is one of those rare books that seamlessly combines postmetaphysical philosophy and political practice, the task of a meticulous ontological interpretation and decisive revolutionary action, the critique of intellectual hegemony and a positive, creative thought. Vattimo and Zabala, unlike Michael Hardt and Antonio Negri, do not offer their readers a readymade political ontology but allow radical politics to germinate from each singular and concrete act of interpretation. This is the most significant event of twenty-first-century philosophy! Michael Marder, author of Groundless Existence: The Political Ontology of Carl Schmitt

The authors argue that 'weak thought,' or an antifoundational hermeneutics, will allow social movements to avoid both the violence attending past struggles and, if triumphant, a falling back into routines of domination—the restoration of what Jean-Paul Sartre called the 'practico-inert.' Vattimo and Zabala end with Latin America as a case study of applied weak thought politics, where the left in recent years has had remarkable success at the polls. Greg Grandin, New York University

Those interested in the potential for theoretical reformulations made possible by postfoundational political thought and those following the rebellion of marginal sectors of society have a lot to learn from this remarkable book. Ernesto Laclau, author of On Populist Reason

The work of Vattimo and Zabala clears a new stage for political theorizing based on a careful probe of the current state of destitution and hidden edges of social vitality. While I do not always agree with the conclusions drawn by these marvelous writers, I thank them for sparking an essential debate and replenishing our critical vocabularies. Avital Ronell, New York University and the European Graduate School

...Vattimo and Zabala offer a refreshing alternative to the hegemonic discourse, a breathof fresh air from the violent imposition of "metaphysics" by those in power. Ceasefire Magazine

Despite its thin profile the content itself is formidable in achieving both its critical and scholarly aims. Maxwell Kennel, Canadian Society for Continental Philosophy Blog

Gianni Vattimo is emeritus professor of philosophy at the University of Turin and a member of the European Parliament. His books with Columbia University Press include A Farewell to Truth; The Responsibility of the Philosopher; Christianity, Truth, and Weakening Faith: A Dialogue (with R. Girard); Not Being God: A Collaborative Autobiography (with P. Paterlini); Art's Claim to Truth; After the Death of God (with John D. Caputo); Dialogue with Nietzsche; The Future of Religion (with Richard Rorty); Nihilism and Emancipation: Ethics, Politics, and Law; and After Christianity.

Santiago Zabala is ICREA Research Professor at the University of Barcelona. He is the author of The Remains of Being: Hermeneutic Ontology After Metaphysics and The Hermeneutic Nature of Analytic Philosophy: A Study of Ernst Tugendhat; editor of Art's Claim to Truth, Weakening Philosophy, Nihilism and Emancipation, and The Future of Religion; and coeditor (with Jeff Malpas) of Consequences of Hermeneutics.