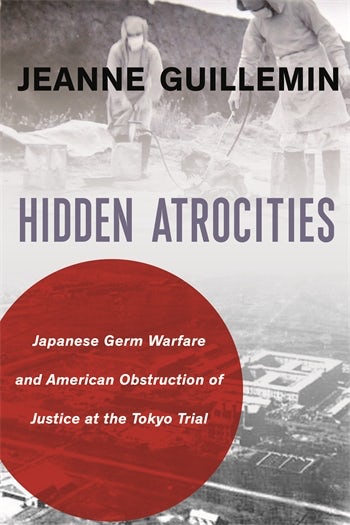 In the aftermath of World War II, the Allied intent to bring Axis crimes to light led to both the Nuremberg trials and their counterpart in Tokyo, the International Military Tribunal of the Far East. Yet the Tokyo Trial failed to prosecute imperial Japanese leaders for the worst of war crimes: inhumane medical experimentation, including vivisection and open-air pathogen and chemical tests, which rivaled Nazi atrocities, as well as mass attacks using plague, anthrax, and cholera that killed thousands of Chinese civilians. In Hidden Atrocities, Jeanne Guillemin goes behind the scenes at the trial to reveal the American obstruction that denied justice to Japan’s victims.

Responsibility for Japan’s secret germ-warfare program, organized as Unit 731 in Harbin, China, extended to top government leaders and many respected scientists, all of whom escaped indictment. Instead, motivated by early Cold War tensions, U.S. military intelligence in Tokyo insinuated itself into the Tokyo Trial by blocking prosecution access to key witnesses and then classifying incriminating documents. Washington decision makers, supported by the American occupation leader, General Douglas MacArthur, sought to acquire Japan’s biological-warfare expertise to gain an advantage over the Soviet Union, suspected of developing both biological and nuclear weapons. Ultimately, U.S. national-security goals left the victims of Unit 731 without vindication. Decades later, evidence of the Unit 731 atrocities still troubles relations between China and Japan. Guillemin’s vivid account of the cover-up at the Tokyo Trial shows how without guarantees of transparency, power politics can jeopardize international justice, with persistent consequences.

Hidden Atrocities is a meticulously sourced, very readable, and deeply disturbing blow-by-blow account of how Japanese military doctors first colluded to conceal their research, development, and field trials of germ warfare against people in China and were then recruited by U.S. Army counterparts eager to deny Japanese data to the Soviets while using it to build America's own germ warfare capabilities. In combination, these cover-ups left the ill-prepared prosecutors at the incompetently organized Tokyo war crimes trials without the evidence they needed to bring charges, freed war criminals to pursue prestigious careers in medical business, education, and research in postwar Japan, and denied closure to the victims of Japanese aggression. Full of memorable personalities, Hidden Atrocities is a documentary "whodunit" that brings a disgraceful moment in history long erased by a shocking obstruction of justice back to vivid life. Ambassador Chas W. Freeman Jr., former U.S. assistant secretary of defense

Jeanne Guillemin has used extensive new archival materials to tell an important and disturbing story that casts doubt on how justice was administered in postwar Asia. She shows that U.S. actions prevented the prosecution of Japanese war crimes, including experiments on humans and work on bacteriological warfare. Standing alongside classic works by Barak Kushner, Sheldon Harris, and Bu Ping, this book is essential reading for those who want to understand the complexities and compromised realities of the post-World War II order. Rana Mitter, director, University of Oxford China Centre and author of China's War with Japan, 1937-45: The Struggle for Survival

It has taken decades for the cruel human experiments perpetrated by imperial Japan to come into sharp relief. Jeanne Guillemin's book is both a fascinating background account of the Tokyo war crimes trial and a dispiriting tale of moral compromise. Her meticulous reconstruction of this failure of justice should stand as a worthy if long-delayed memorial to the victims. Jonathan Moreno, University of Pennsylvania Perelman School of Medicine and author of Undue Risks: Secret State Experiments on Humans

Guillemin is a recognized, well-published leading authority on the history of biological warfare in the United States. No other book delves this deeply into the behind-the-scenes machinations of U.S. military intelligence in Japan and the inner circle of presidential advisors in Washington to keep Unit 731 and its horrendous acts from being exposed to the light of justice in the Tokyo Trials. Walter E. Grunden, Bowling Green State University, author of Secret Weapons and WWII: Japan in the Shadow of Big Science

Imperial Japan’s germ-warfare program, with its brutal experiments, numerous nameless victims, and many atrocities against Chinese civilian populations, disappeared from history at the end of WWII, despite the American-directed Tokyo War Crimes Trial in 1946 and later Soviet proceedings. The Japanese had destroyed records, killed witnesses, and razed research sites, making prosecution very difficult. U.S. Military Intelligence was not inclined to push to make public what had happened since they wanted to take advantage of what the Japanese knew about biological warfare as the Soviet Union loomed as a new opponent of the West. Japan was seen as a potential powerful ally in the emerging cold war environment, meaning foreign policy and national security trumped holding an important new ally to account. The U.S. dismissed Soviet efforts at prosecution as propaganda. To this day silence and denial have dominated the gruesome facts. Hidden Atrocities provides a long overdue scholarly remedy. The victims now have a powerful voice to contend with those who decided to bury their right to justice. Thanks to Jeanne Guillemin, the reasons this indefensible omission occurred are lucidly and skillfully presented. Arthur Caplan, founding director, New York University School of Medicine Division of Bioethics

Guillemin’s account is a perfect companion to the classic study by Sheldon Harris (Factories of Death: Japanese Biological Warfare, 1932-1941, and the American Cover-up), which is mostly devoted to the crimes rather than America’s obstruction of justice during the IMTFE. This book deserves a wide readership because it’s on an insufficiently-researched aspect of an important topic. Giulio Pugliese, Pacific Affairs

Jeanne Guillemin is senior advisor at the Security Studies Program in the MIT Center for International Studies. Her books include Anthrax: The Investigation of a Deadly Outbreak (1999); Biological Weapons: From the Invention of State-Sponsored Programs to Contemporary Bioterrorism (Columbia, 2004); and American Anthrax: Fear, Crime, and the Investigation of the Nation’s Deadliest Bioterrorist Attack (2011).