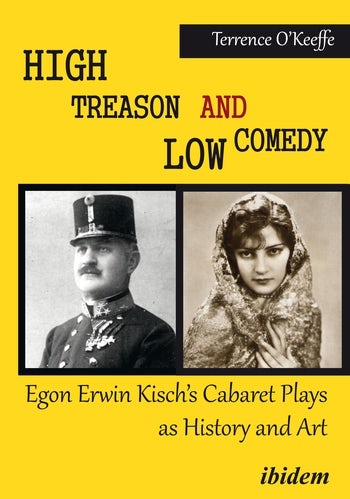 High Treason and Low Comedy is the first in-depth treatment in English of E. E. Kisch’s work as a playwright, a phase of his life to which he devoted considerable effort during the years 1920–1925.The translations of his two most successful works for the cabaret stages of Germany, Austria, and Czechoslovakia form the basis of discussions that fit them into several intersecting streams: biographical, historical, and cultural. The plays are Die Hetzjagd, which describes the last day on earth of the infamous traitor, Colonel Alfred Redl, and Die Himmelfahrt der Tonka Šibenice (Galgentoni), which presents the comical, coarse, and, at times, pathetic efforts of a Prague prostitute to argue her way into heaven. The plays are a portal into the world of Kisch’s youth as an enterprising journalist and into his thinking and writing just before he became “the raging reporter” and the star of international reportage. While they reflect the Prague milieu of his youth during the twilight years of the Austro-Hungarian Empire, they also illustrate Kisch’s lifelong critical attitude toward the conservative authorities of society, their derelictions of duty, and their indifference to the welfare of the common man and woman.

The book also examines the long afterlife of both of these stories as they were re-created by artists in stage, film, novelistic, and television adaptations, illustrating the theme of what happens when historical materials are transformed into art.

Egon Erwin Kisch is one of the most exciting and innovative authors of the first half of the 20th century. He was a vital part of the vibrant Prague literary scene that included his contemporaries Franz Kafka, Carl Capek, and Jaroslav Hasek. But until now Kisch's literary texts and the story of the adventurous life that lay behind those texts have been little-known in the English-speaking world. Terrence O'Keeffe's entertaining and informative book High Treason and Low Comedy offers―for the first time―English language translations of two of Kisch's most important plays and places them within the context of his extraordinary career and historical moment. O'Keeffe's book offers an entertaining and informative journey into Kisch's early-20th-century world and is a welcome addition to the literature on this important journalist, author, and adventurer. Professor Todd Herzog, University of Cincinnati

High Treason and Low Comedy, Terrence O'Keeffe's comprehensive study of Egon Erwin Kisch, is an important contribution to our understanding of the complexity of interwar Austrian Jewish culture. O'Keeffe is a masterful translator who not only brings two of Kisch's plays to the English-speaking reader, but even more importantly, sheds light on this emblematic and fascinating writer. Professor Leslie Morris, University of Minnesota

Terrence O’Keeffe, born in Baltimore in 1944, attended Princeton University, with a hiatus for service in the US army. He graduated in 1971 with a degree in Art History, studied anthropology at Rutgers University, and then worked as a research scientist for 35 years at the Nathan Kline Institute for Psychiatric Research in Orangeburg, New York. Since 2011, his writing about Central and Eastern European writers, culture, and history has appeared in The Hungarian Quarterly, The Sarmatian Review, The Polish Review, The Slavic and East European Journal, the Ruthenian journal Шветлосц, and the Australian journal Labour History.