The Directors Guild of America and the Construction of Authorship 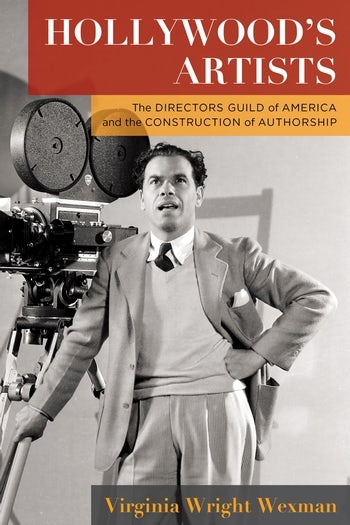 The Directors Guild of America and the Construction of Authorship

Today, the director is considered the leading artistic force behind a film. The production of a Hollywood movie requires the labor of many people, from screenwriters and editors to cinematographers and boom operators, but the director as author of the film overshadows them all. How did this concept of the director become so deeply ingrained in our understanding of cinema?

In Hollywood’s Artists, Virginia Wright Wexman offers a groundbreaking history of how movie directors became cinematic auteurs that reveals and pinpoints the influence of the Directors Guild of America (DGA). Guided by Frank Capra’s mantra “one man, one film,” the Guild has portrayed its director-members as the creators responsible for turning Hollywood entertainment into cinematic art. Wexman details how the DGA differentiated itself from other industry unions, focusing on issues of status and creative control as opposed to bread-and-butter concerns like wages and working conditions. She also traces the Guild’s struggle for creative and legal power, exploring subjects from the language of on-screen credits to the House Un-American Activities Committee’s investigations of the movie industry. Wexman emphasizes the gendered nature of images of the great director, demonstrating how the DGA promoted the idea of the director as a masculine hero. Drawing on a broad array of archival sources, interviews, and theoretical and sociological insight, Hollywood’s Artists sheds new light on the ways in which the Directors Guild of America has shaped the role and image of directors both within the Hollywood system and in the culture at large.

This book fills a significant void in film history and offers an original and important argument about the role of the director in the ‘authorship’ of Hollywood films. Tom Schatz, University of Texas at Austin

Virginia Wright Wexman is professor emerita of English and art history at the University of Illinois at Chicago. Her books include Creating the Couple: Love, Marriage, and Hollywood Performance (1993) and A History of Film (seventh edition, 2010).