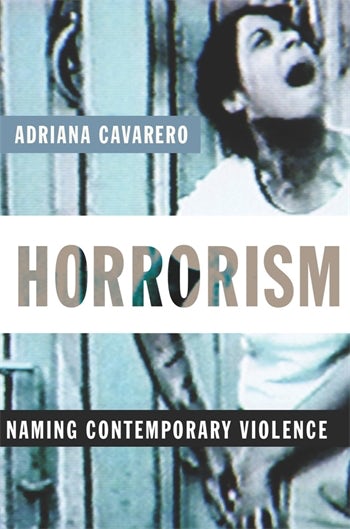 Words like "terrorism" and "war" no longer encompass the scope of contemporary violence. With this explosive book, Adriana Cavarero, one of the world's most provocative feminist theorists and political philosophers, effectively renders such terms obsolete. She introduces a new word"horrorism"to capture the experience of violence.

Unlike terror, horrorism is a form of violation grounded in the offense of disfiguration and massacre. Numerous outbursts of violence fall within Cavarero's category of horrorism, especially when the phenomenology of violence is considered from the perspective of the victim rather than that of the warrior. Cavarero locates horrorism in the philosophical, political, literary, and artistic representations of defenseless and vulnerable victims. She considers both terror and horror on the battlefields of the Iliad, in the decapitation of Medusa, and in the murder of Medea's children. In the modern arena, she forges a link between horror, extermination, and massacre, especially the Nazi death camps, and revisits the work of Primo Levi, Hannah Arendt's thesis on totalitarianism, and Arendt's debate with Georges Bataille on the estheticization of violence and cruelty.

In applying the horroristic paradigm to the current phenomena of suicide bombers, torturers, and hypertechnological warfare, Cavarero integrates Susan Sontag's views on photography and the eroticization of horror, as well as ideas on violence and the state advanced by Thomas Hobbes and Carl Schmitt. Through her searing analysis, Caverero proves that violence against the helpless claims a specific vocabulary, one that has been known for millennia, and not just to the Western tradition. Where common language fails to form a picture of atrocity, horrorism paints a brilliant portrait of its vivid reality.

Her book is indispensable for anyone keen to understand violence in our society today. Joanna Bourke, Environment and Planning D

Adriana Cavarero is professor of political philosophy at the University of Verona. Her books in English include In Spite of Plato: A Feminist Rewriting of Ancient Philosophy; Stately Bodies: Literature, Philosophy, and the Question of Gender; Relating Narratives: Storytelling and Selfhood; and For More Than One Voice: Toward a Philosophy of Vocal Expression.