How the Red Sun Rose

The Origin and Development of the Yan'an Rectification Movement, 1930–1945 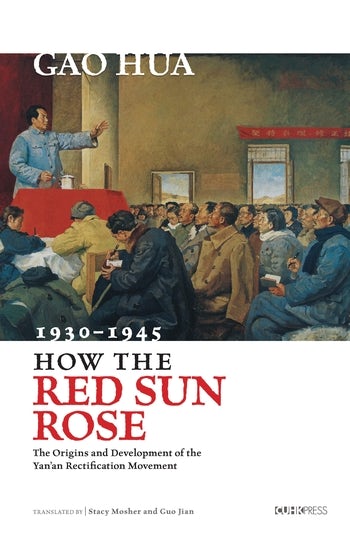 How the Red Sun Rose

The Origin and Development of the Yan'an Rectification Movement, 1930–1945

This work offers the most comprehensive account of the origin and consequences of the Yan’an Rectification Movement from 1942 to 1945. The author argues that this campaign emancipated the Chinese Communist Party from Soviet-influenced dogmatism and unified the Party, preparing it for the final victory against the Nationalist Party in 1949. More importantly, this monograph shows in great detail how Mao Zedong established his leadership through this party-wide political movement by means of aggressive intraparty purges, thought control, coercive cadre examinations, and total reorganizations of the Party’s upper structure. The result of this movement not only set up the foundation for Mao’s new China, but also deeply influenced the Chinese political structure today.

The Chinese version of How the Red Sun Rose was published in 2000, and has had twenty-two printings since then.

[Gao Hua] combined thorough research into original materials with well-organized presentation. His work on Yan'an has permitted us to have a new understanding of the era. Ezra Vogel, Harvard University

A monumental and path-breaking study of Mao's rise in the party, a product of prodigious research in a vast range of documentaries, memoirs and archival sources, this book is the best account we have of the deep historical roots of the rectification campaign in the 1940s. Joseph W. Esherick, University of California, San Diego

Gao broke the norm of the official narrative of Chinese Communist Party history—his monograph has become the new paradigm of historiography in this field. Xiao Yanzhong, East China Normal University

This lucid translation of Gao Hua’s seminal study of the Yan’an rectification movement and the rise of Mao Zedong to paramount leadership of the Chinese Communist Party is a major contribution to international scholarship. The Chinese edition of How the Red Sun Rose set the standard for truly scholarly studies of Party history among PRC scholars ever since the first edition came out in 2000, and it still has not been surpassed. International scholars of modern China and of comparative politics will benefit from this authoritative translation and its many explanatory notes. General readers will enjoy Professor Gao’s engaging writing. Timothy Cheek, University of British Columbia

This forceful account of Mao Zedong’s rise to preeminence displays extraordinary insight into the nature of power in the Chinese Communist Party. It provides a detailed narrative of the personal conflicts, purges, ideological struggle, and structural reorganization that enabled Mao to defeat his Soviet-backed rival, Wang Ming. The climax of the book comes in an eye-opening account of the Rectification Movement in Yan’an in 1942–44, which is a tour de force of prodigious research, meticulous analysis, and deep reflection. S. A. Smith, University of Oxford

Finally available in a superb English translation, How the Red Sun Rose is the masterwork of the esteemed, independent, and controversial historian Gao Hua, who was based at Nanjing University before his tragic death in 2012. Banned in China, this book is a must read for all who want to understand the trademark strategies deployed by Mao Zedong to achieve, maintain, and expand his political control both within the Communist Party and throughout Chinese society. Paul G. Pickowicz, University of California, San Diego

A monumental and pathbreaking study of Mao’s rise in the party, a product of prodigious research in a vast range of documents, memoirs, and published archival sources, this book is the best account we have of the deep historical roots of the rectification campaign in the 1940s. Joseph W. Esherick, University of California, San Diego

Gao Hua (1954–2011) was a professor at Nanjing University and a leading historian of the Chinese Communist Party and twentieth-century China.

Stacy Mosher is an editor and translator based in Brooklyn, New York.

Guo Jian is professor of English at the University of Wisconsin-Whitewater.