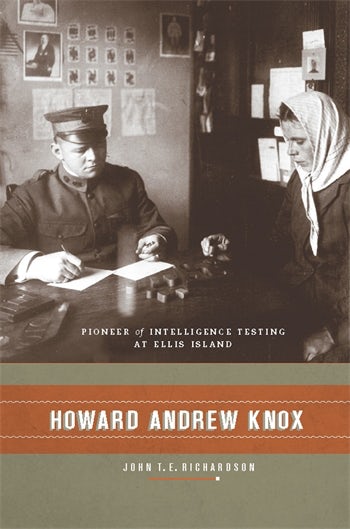 Howard Andrew Knox (1885–1949) served as assistant surgeon at Ellis Island during the 1910s, administering a range of verbal and nonverbal tests to determine the mental capacity of potential immigrants. An early proponent of nonverbal intelligence testing (largely through the use of formboards and picture puzzles), Knox developed an evaluative approach that today informs the techniques of practitioners and researchers. Whether adapted to measure intelligence and performance in children, military recruits, neurological and psychiatric patients, or the average job applicant, Knox's pioneering methods are part of contemporary psychological practice and deserve in-depth investigation.

Completing the first biography of this unjustly overlooked figure, John T. E. Richardson, former president of the International Society for the History of the Neurosciences, takes stock of Knox's understanding of intelligence and his legacy beyond Ellis Island. Consulting published and unpublished sources, Richardson establishes a chronology of Knox's life, including details of his medical training and his time as a physician for the U.S. Army. He describes the conditions that gave rise to intelligence testing, including the public's concern that the United States was opening its doors to the mentally unfit. He then recounts the development of intelligence tests by Knox and his colleagues and the widely-discussed publication of their research. Their work presents a useful and extremely human portrait of psychological testing and its limits, particularly the predicament of the people examined at Ellis Island. Richardson concludes with the development of Knox's work in later decades and its changing application in conjunction with modern psychological theory.

With respect to the centrality of psychological testing on a truly global scale today (not to mention human resource recruitment, personality assessment, and terrorism defense), John Richardson's book will acquire a wide readership extending far beyond the community of psychologists and historians of psychology and immigration. In fact, the audience for this book ranges from scholars in American history, historians of science, and public and population health researchers to a wide general readership. Richardson focuses on a long-forgotten forbear and a pioneering test protocol, which often goes unnoticed in many standard psychology and behavioral medicine textbooks. His book is an original contribution. Frank W. Stahnisch, University of Calgary, Alberta

John Richardson's work does much to bring us a new look at our past. His book tells of an important chapter in American history and psychology and provides new insights into our ongoing struggles to understand the expression of our cognitive abilities and limitations. David B. Baker, The University of Akron and the Center for the History of Psychology

Howard Andrew Knox is comprehensive and compelling. John Richardson has created a very original work and his examination of a previously unknown contributor to the science of intelligence testing is insightful and original. Eric Turkheimer, University of Virginia

what makes it such an intriguing read, is the complex interrelationship that existed between the emerging science of psychology and the organizational, political, and cultural context inwhich both the idea and the specific techniques of intelligence testing took hold in Americansociety. Steven Ward, PsycCritiques

An important account of the role that one man played during a fertile and important period in the history of American immigration and intelligence testing. Kaitlin Bell Barnett, Psych Central

This book is highly recommended for anyone with an interest in intelligence testing and the historical events that contributed to their adoption by modern psychology Sherry Ginn, Journal of the History of the Neurosciences

Winner, 2017 Outstanding Book in the History of the Neurosciences

John T. E. Richardson is the professor of student learning and assessment at The Open University in the United Kingdom and a former professor of psychology and head of the Department of Human Sciences at Brunel University. He is an academician of the U.K. Academy of Social Sciences, a fellow of the British Psychological Society, and a fellow of the Society for Research into Higher Education. He is an associate editor of the British Journal of Educational Psychology and Psychology Teaching Review, and among his fifteen coauthored and coedited books are Gender Differences in Human Cognition, Imagery: Current Developments, The Future of Higher Education, Intelligent Systems in a Human Context, and Mental Imagery and Human Memory.