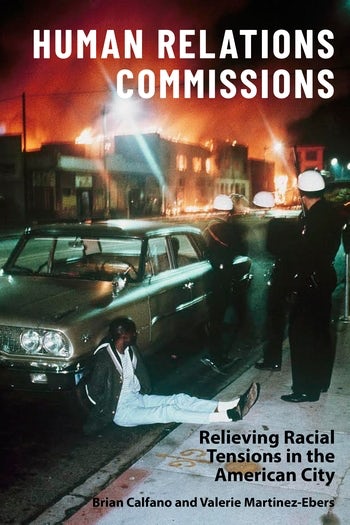 During the 1950s, amid increased attention to the problems facing cities—such as racial disparities in housing, education, and economic conditions; tense community-police relations; and underrepresentation of minority groups—local governments developed an interest in “human relations.” In the wake of the shocking 1965 Watts uprising, a new authority was created: the Los Angeles City Human Relations Commission. Today, such commissions exist all over the United States, charged with addressing such tasks as fighting racial discrimination and improving fair housing access.

Brian Calfano and Valerie Martinez-Ebers examine the history and current efforts of human relations commissions in promoting positive intergroup outcomes and enforcing antidiscrimination laws. Drawing on a wide range of theories and methods from political science, social psychology, and public administration, they assess policy approaches, successes, and failures in four cities. The book sheds light on the advantages and disadvantages of different commission types and considers the stresses and expectations placed on commission staff in carrying out difficult agendas in highly charged political contexts. Calfano and Martinez-Ebers suggest that the path to full inclusion is fraught with complications but that human rights commissions provide guidance as to how disparate groups can be brought together to forge a common purpose. The first book to examine these widely occurring yet understudied political bodies, Human Relations Commissions is relevant to a range of urban policy issues of interest to both academics and practitioners.

Filling a canyon-like void in political science, urban studies, policy and administration, and more, Human Relations Commissions opens a whole new world to the relationship of HRCs and municipal governments. The synthesis of the authors’ varied methodologies and research orientations has created a fascinating book. John Bretting, University of Texas at El Paso

Brian Calfano is associate professor of political science and journalism at the University of Cincinnati. He is a former policy advisor for the City of Los Angeles Human Relations Commission, and his many publications include A Matter of Discretion: The Politics of Roman Catholic Priests in the United States and Ireland (2017) and Muslims, Identity, and American Politics (2018).

Valerie Martinez-Ebers is professor and program director of Latina/o and Mexican American studies and University Distinguished Research Professor of Political Science at the University of North Texas. A former editor of the American Political Science Review, she is coauthor of Politicas: Latina Public Officials in Texas (2008); Latino Lives in America: Making It Home (2010); and Latinos in the New Millennium: An Almanac of Opinion, Behavior, and Policy Preferences (2012), among other works.