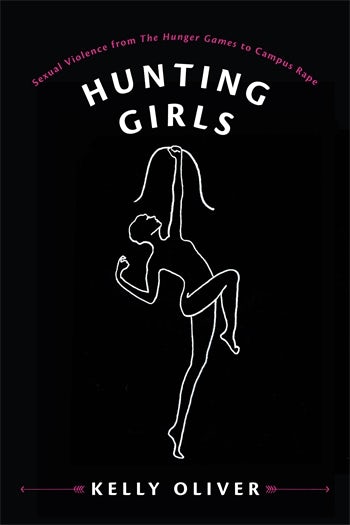 Katniss Everdeen (The Hunger Games), Bella Swan (Twilight), Tris Prior (Divergent), and other strong and resourceful characters have decimated the fairytale archetype of the helpless girl waiting to be rescued. Giving as good as they get, these young women access reserves of aggression to liberate themselves—but who truly benefits? By meeting violence with violence, are women turning victimization into entertainment? Are they playing out old fantasies, institutionalizing their abuse?

In Hunting Girls, Kelly Oliver examines popular culture's fixation on representing young women as predators and prey and the implication that violence—especially sexual violence—is an inevitable, perhaps even celebrated, part of a woman's maturity. In such films as Kick-Ass (2010), The Girl with the Dragon Tattoo (2011), and Maleficent (2014), power, control, and danger drive the story, but traditional relationships of care bind the narrative, and even the protagonist's love interest adds to her suffering. To underscore the threat of these depictions, Oliver locates their manifestation of violent sex in the growing prevalence of campus rape, the valorization of woman's lack of consent, and the new urgency to implement affirmative consent apps and policies.

Kelly Oliver's brilliant analysis of how young girls' path to womanhood is filled with beating, battery, abuse, and sexual assault is shocking and timely. Oliver's meticulously researched volume moves back and forth between myths and fairy tales linked to rape, contemporary films, television shows and ads featuring violence to girls, along with studying rape culture, and ambiguities of 'consent,' on college campuses. It is essential reading, showing that women may not have liberated themselves after all. E. Ann Kaplan, author of Climate Trauma: Foreseeing the Future in Dystopian Film and Fiction

Corpse chic, mounted trophy, dead girl, tough girl—Kelly Oliver explores media representations of a new, empowered heroine in her compelling exploration of the dark side of the modern fairytale and its fascination with violence and rape. Oliver asks the reader to think seriously about the forces that drive rape culture and the eroticization of violence. A challenging, disturbing, and enlightening book. Barbara Creed, author of The Monstrous-Feminine: Film, Feminism, Psychoanalysis

In her detailed attention to contemporary films and social media, and in linking up today's violence against women with a long line of treasured fables and cultural archetypes, Kelly Oliver makes an important contribution to a discussion of great urgency. With eloquence and perspective, she not only exposes patterns of aggression against women but also shows the sometimes problematic ways in which women try to restore the balance. Molly Haskell, author of From Reverence to Rape: The Treatment of Women in the Movies

A must read for scholars and students. Choice

Although Oliver’s analyses are nuanced, her language is accessible and even blunt. The Revealer

Recommended for college and university libraries, especially those that support gender studies and cultural or media studies programs. Feminist Collections

Acknowledgments
Introduction: Girls as Trophies
1. A Princess Is Being Beaten and Raped
2. Rape as Spectator Sport and Creepshot Entertainment
3. Girls as Predators and Prey
Conclusion: The New Artemis, Title IX, and Taking Responsibility for Sexual Assault
Notes
Works Cited
Index

Kelly Oliver is W. Alton Jones Professor of Philosophy at Vanderbilt University. Her many books include Women as Weapons of War: Iraq, Sex, and the Media (2007), Animal Lessons: How They Teach Us to Be Human (2009), Knock Me Up, Knock Me Down: Images of Pregnancy in Hollywood Films (2012), and Earth and World: Philosophy After the Apollo Missions (2015).