I Speak of the City 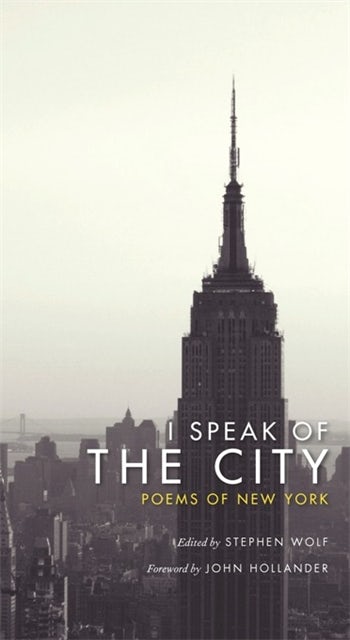 I Speak of the City

I Speak of the City is the most extensive collection of poems ever assembled about New York. Beginning with an early piece by Jacob Steendam (from when the city was called New Amsterdam) and continuing through poems written in the aftermath of 9/11, this anthology features voices from more than a dozen countries. It includes two Nobel Prize recipients, fifteen Pulitzer Prize winners, and many other recognizable names, but it also preserves the work of long-neglected poets who celebrate the wild possibilities and colossal achievements of this epic city.

Poets capture New York's major moments and transformations, writing of Hudson's arrival, Stuyvesant's prejudice, and the city's astonishing growth and gentrification. They speak of the thrills of a skyscraper's observation deck and the privations of teeming tenements. They portray the immigrant experience at Ellis Island and the decay, fear, and unexpected kindness on a subway ride. They take place on sidewalks, bridges, and docks; in taxis, buses, and ferries; and even within nature. The Brooklyn Bridge, Times Square, Broadway, the Statue of Liberty, and other familiar landmarks are recast through the prism of individual experience yet still reflect the seeming invincibility of New York and its status as a cultural magnet for the freethinking and experimental.

While certain subjects and themes can be found in all urban verse, poems about New York have their own restless rhythm and ever-changing style, much like the city itself. Whether writing sonnets, epics, or experimental or imagistic verse, each of these poets has been inspired by the marvels and madness, humor and heartbreak of an enduring city.

A wonderful series of snapshots—impressions through verse—of our city. New York Post

[I Speak of the City] reminds jaded New Yorkers that some people can find poetry in the magnificent and the mundane. Sam Roberts, New York Times

Read >John Hollander's foreword, "The Poem of the City".

Born in Chicago and with a doctorate from the University of Illinois, Stephen Wolf moved to the Lower East Side in 1977, blocks from where his grandparents once lived. His fiction has appeared in Playboy, Ploughshares, and the anthology American Families, and his story cycle Intimate Articles, with illustrations by Larry Rivers, was published by Ten Speed Press. He teaches literature and the humanities at Berkeley College in New York City.