Imitation and Creativity in Japanese Arts

From Kishida Ryusei to Miyazaki Hayao 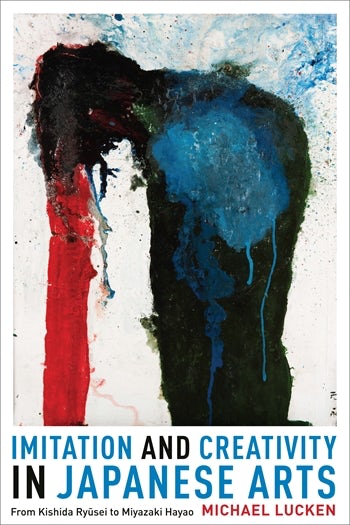 Imitation and Creativity in Japanese Arts

From Kishida Ryusei to Miyazaki Hayao

The idea that Japanese art is produced through rote copy and imitation is an eighteenth-century colonial construct, with roots in Romantic ideals of originality. Offering a much-needed corrective to this critique, Michael Lucken demonstrates the distinct character of Japanese mimesis and its dynamic impact on global culture, showing through several twentieth-century masterpieces the generative and regenerative power of Japanese arts.

Choosing a representative work from each of four modern genres—painting, film, photography, and animation—Lucken portrays the range of strategies that Japanese artists use to re-present contemporary influences. He examines Kishida Ryusei's portraits of Reiko (1914–1929), Kurosawa Akira's Ikiru (1952), Araki Nobuyoshi's photographic novel Sentimental Journey—Winter (1991), and Miyazaki Hayao's popular anime film Spirited Away (2001), revealing the sophisticated patterns of mimesis that are unique but not exclusive to modern Japanese art. In doing so, Lucken identifies the tensions that drive the Japanese imagination, which are much richer than a simple opposition between progress and tradition, and their reflection of human culture's universal encounter with change. This global perspective explains why, despite its non-Western origins, Japanese art has earned such a vast following.

Thoroughly documented, and including a select bibliography, Lucken's book is required reading for artists and for historians and connoisseurs of Japanese arts.... Essential. Choice

A well-written and rigorously researched analysis that is grounded in both Continental and Japanese theoretical literature. The book will offer a perspective that is fresh for many readers and will be a significant contribution to the current literature on modern Japanese art and visual culture. Jonathan Reynolds, Barnard College

Lucken skillfully takes on the powerful and persistent stereotype of the Japanese as imitative and derivative. His erudite and measured treatment not only debunks this misrepresentation once and for all but also authoritatively demonstrates its insidious ideological legacy. Gennifer Weisenfeld, Duke University

This book is an erudite, far-reaching, and deftly transnational inquiry into the philosophical bases and artistic practices of imitation and creativity. Lucken mounts an effective critique of one of the most fundamental underpinnings of discourses privileging Euro-American modernism and offers conceptual alternatives for rethinking modernist studies. This elegantly translated book is a must-read for anyone interested in modernism and is particularly essential for scholars working on multiple modernisms. Ming Tiampo, author of Gutai: Decentering Modernism

Lucken questions the very 'orientalist' hegemonic structure of, in the words of Edward Said, 'grasping the other,' which has woven up the discourses on things Japanese in mutual dependence. Therefore, his book endeavors to overcome the dominant academic framework, which has been concocted in the midst of Western imperialism, and the reactions against it from the rest of the world. Shigemi Inaga, International Research Center for Japanese Studies

In this provocative book, Michael Lucken tackles the difficult issue of the relationship between copy and original in art. . . . A valuable contribution to the field. Brenda G. Jordan, Japanese Studies

Introduction
Part I. A Historical Construction
1. Copycat Japan
2. The West and the Invention of Creation
3. The Denial, Rejection, and Sublimation of Imitation
4. No Poaching
5. Seen from Japan
6. The Logic of Reflection in Nakai Masakazu
Part II. A New Place for Imitation
7. Kishida Ryusei's Portraits of Reiko, or, How Can Ghosts Be at Work?
8. Kurosawa Akira's Ikiru, or, the Impossibility of Metaphor
9. Araki Nobuyoshi's Sentimental Journey—Winter, or, Eternal Bones
10. Miyazaki Hayao's Spirited Away, or, the Adventure of the Obliques
Conclusion
Notes
Select Bibliography
Index

Michael Lucken is a professor at the National Institute of Oriental Languages and Civilizations in Paris. He is the author of L'Art du Japon au vingtième siècle (Japanese Art in the Twentieth Century, 2001) and a coeditor of Japan's Postwar (2011).