In Love and Struggle 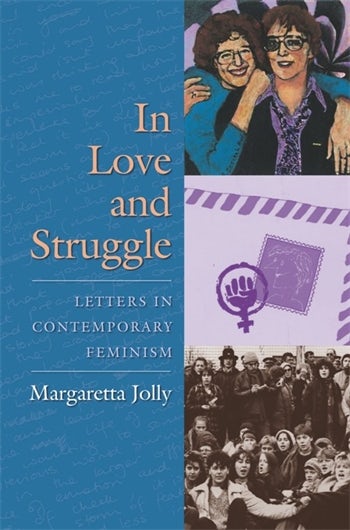 In Love and Struggle

Winner of the 2009 Feminist and Women's Studies Association Book Prize

Do you think I can be a feminist mother? Did I make you and your kisses up in my mind? Will you join our military protest at the gate? Will you feed the kids when I'm in prison? Are you able to forgive me for breaking off this correspondence because you are a man?

During the women's movement of the 1970s and 1980s, feminists in the United States and Britain reinvented the image of the woman letter writer. Symbolically tearing up the love letter to an absent man, they wrote passionate letters to one another, exploring questions of sexuality, separatism, and strategy. These texts speak of the new interest women began to feel in one another and the new demandsand disappointmentsthese relationships would create.

Margaretta Jolly provides the first cultural study of these letters, charting the evolution of feminist political consciousness from the height of the women's movement to today's e-mail networks. Jolly uncovers the passionate, contradictory emotions of both politics and letter writing and sets out the theory behind them as a fragile yet persistent ideal of care ethics, women's love, and epistolary art. She follows several compelling feminist relationships sustained through writing and confronts the mixed messages of the "open letter," which complicated political relations between women (such as Audre Lorde's "Open Letter to Mary Daly," which called out white feminists for their implicit racism).

Jolly recovers the unsung literature of lesbianism and feminist romance, examines the ambivalent feelings within mother-daughter correspondences, and considers letter-writing campaigns during the peace movement. She concludes with a discussion of the ethical dilemma surrounding care versus autonomy and the meaning behind the burning or saving of letters. Letters that chart love stories, letters stowed away in attics, letters burnt at the end of romances, bittersweet letters written but never sent... this fascinating glimpse into women's intimate archives illuminates one of feminism's central concernsthat all relationships are politicaland uniquely recasts a social movement in very emotional terms.

This is a smart and savvy booka fascinating study of what letters have meant to women as writers and readers over the past four decades. Situating letter writing as both demand and gift and mapping the feminist ethic of care that developed from this vast personal archive, In Love and Struggle is essential for feminist cultural projects. Julia Watson, Ohio State University

In Love and Struggle is a lively story of second-wave British and American feminists, revealed through their public and intimate letters. From the women's encampments at Greenham Common and beside the Seneca Army Depot to the Fourth World Conference on Women in Beijing, Margaretta Jolly shows how vital epistolary testimony has been. She provides an overview of feminist literary criticism of epistolarity, and she analyzes letters between mothers and daughters, lesbian love letters, email novels, memoirs, and feminist activist communities on the Web. Drawing on archival research, feminist theory, and ethics, Jolly examines a wide range of social, literary, and political practices in which letter writing plays a pivotal role. Linda S. Kauffman, professor of English, University of Maryland

An important contribution to the history of second-wave feminism and offers valuable new insights into letter writing as a feminist literary practice. Emma Parker, Feminist Review

Introduction. The Feminist World of Love and Ritual
Part I. Yours in Sisterhood. . .
1. Love Letters to a New Me
2. Feminist Epistolary Romance
3. Velvet Boxing Gloves
Part II: Letter Writing and the Ethics of Care
4. Theorizing Feminist Letters
5. Mothers and Daughters in Correspondence
6. Writing the Web: Letters from the Women's Peace Movement
7. Do Webs Work? Letters and the Clash of Communities
Part III: The Right to Be Cared For: Letters and the Life Cycle of a Social Movement
8. Care Versus Autonomy: The Problem of (Loving) Men
9. The Paradox of Care as a Right
10. How Different Is E-mail?
11. Care Ethics Online
Part IV: The Afterlife of Letters
12. On Burning and Saving Letters
13. Stealing Letters: The Ethics of Epistolary Research
Conclusion
Notes
Bibliography
Acknowledgments
Index

Margaretta Jolly is a director of the Centre for Life History and Life Writing Research and senior lecturer at the University of Sussex, as well as the editor of The Encyclopedia of Life Writing and Dear Laughing Motorbyke: Letters from Women Welders of the Second World War.