In Pursuit of Privilege 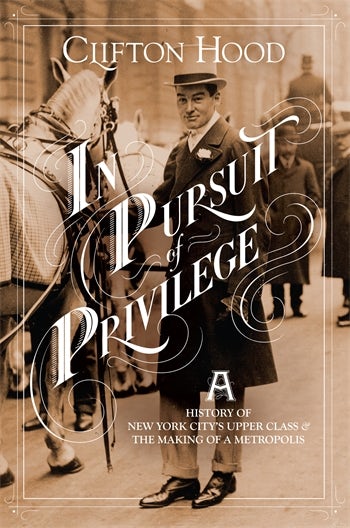 In Pursuit of Privilege

A history that extends from the 1750s to the present, In Pursuit of Privilege recounts upper-class New Yorkers' struggle to create a distinct world guarded against outsiders, even as economic growth and democratic opportunity enabled aspirants to gain entrance. Despite their efforts, New York City's upper class has been drawn into the larger story of the city both through class conflict and through their role in building New York's cultural and economic foundations.

In Pursuit of Privilege describes the famous and infamous characters and events at the center of this extraordinary history, from the elite families and wealthy tycoons of the eighteenth and nineteenth centuries to the Wall Street executives of today. From the start, upper-class New Yorkers have been open and aggressive in their behavior, keen on attaining prestige, power, and wealth. Clifton Hood sharpens this characterization by merging a history of the New York economy in the eighteenth century with the story of Wall Street's emergence as an international financial center in the late nineteenth and early twentieth centuries, as well as the dominance of New York's financial and service sectors in the 1980s. Bringing together several decades of upheaval and change, he shows that New York's upper class did not rise exclusively from the Gilded Age but rather from a relentless pursuit of privilege, affecting not just the urban elite but the city's entire cultural, economic, and political fabric.

This is the history of a small but hugely consequential group of Americans, whose access to economic resources provided them with unprecedented social, cultural, and political power. Clifton Hood's lively excursion into their world of social clubs and museums, dinners and finishing schools covers more than 250 years and shows persuasively how the upper class made New York and how New York constantly changed its upper class. Sven Beckert, author of Empire of Cotton: A Global History

Every city has a social and economic elite. But as Hood shows, the New York elite has always been larger, wealthier, more fluid, and more powerful than in other places, enabling it to simultaneously perpetuate class inequality and create cultural institutions that are world-class in every field. Groundbreaking and comprehensive, The Pursuit of Privilege illuminates three centuries of the New York City elite's power and influence on city building. Bravo to Hood. Kenneth T. Jackson, editor of The Encyclopedia of New York City

Hood's comprehensive, three-centuries-long survey of the experiences of New York City's upper class reveals both the dynamism and the tensions inherent in that ever-evolving group. His study extends from wealthy colonists in the 1750s through nineteenth-century entrepreneurs and nouveaux riches to those he dubs the contemporary 'antielitist elite,' mixing insightful general observations with telling portraits of particular men, women, or families who succeeded or failed to join the upper class. This book will interest anyone who wants to understand the origins of New York City's unique combination of economic, social, and cultural institutions. Mary Beth Norton, author of In the Devil's Snare: The Salem Witchcraft Crisis of 1692

Hood's revealing book provides us with a suggestive portrait of a powerful and self-conscious elite that for over two centuries has maintained its position through its control over a constellation of exclusive organizations. He explores not only the self-conception of this elite but also its shifting relationship with its environs. No comparable study exists, making In Pursuit of Privilege a welcome contribution to historical writing on one of the world's great cities. Richard John, author of Network Nation: Inventing American Telecommunications

In Pursuit of Privilege is an impressive, detailed study of the upper class in New York over a period of more than two centuries. Written engagingly, the book distinguishes itself in the literature with its long-term view of New York's elite class, covering many of the major events in New York's history from the Revolutionary War to the Civil War draft riots to the rise of corporate America. An important contribution to the literature on the history of New York and elite society in the United States. Susie Pak, author of Gentlemen Bankers: The World of J. P. Morgan

In Pursuit of Privilege, appropriately, is a wealth of information. And its primary-source materials—diaries, letters, memoirs, minutes, period fictions—are a true pleasure.... In Pursuit of Privilege is at its best as metropolitan history, assiduously researched, reminding us not only of New York's astonishing accomplishments but also of its inglorious past. William L. Hamilton, Wall Street Journal

[In Pursuit of Privilege] explores the blue blood that has coursed through the city's veins since before the American Revolution.... [Hood] earnestly places the well-traversed late 19th century in a broader historical perspective and identifies what distinguished New York's elites from the upper crusts of other cities. Sam Roberts, The New York Times

A nuanced and substantial historical survey of the city's upper class.... Much about the book feels fresh and relevant to conversations about privilege and equal opportunity. Ada Calhoun, Times Literary Supplement

This is a very well-written, organized, extensively researched study that makes significant contributions to urban, social class, and US history. Choice

A valuable work on New York City history. . . . that will add to anyone’s knowledge of New York City and how it operates. Joseph Varga, The American Historical Review

Fascinating, absolutely absorbing, rich of anecdotes and stories that will let you discover people, places, who made New York City. Anna Maria Polidori, Articles and more...

Introduction: The Upper Class Is a Foreign Country
1. "The Best Mart on the Continent": The 1750s and 1760s
2. Uncertain Adjustments: The 1780s and 1790s
3. Wealth: The 1820s and Beyond
4. All for the Union: The 1860s
5. A Dynamic Businessman's Aristocracy: The 1890s
6. The Ways of Millionaireville: The 1890s
7. Making Spaces of Their Own: The 1940s
8. The Antielitist Elite: The 1970s and Beyond
Conclusion: The Limits of Antielitism
Acknowledgments
Abbreviations for Selected Manuscript Sources
Notes
Index

Clifton Hood is George E. Paulsen ’49 Professor of American History and Government at Hobart and William Smith Colleges. He is the author of 722 Miles: The Building of the Subways and How They Transformed New York (1993), and his work has appeared in the Journal of Urban History, Journal of Social History, Reviews in American History, and the New York Times.