In the Beginning, Woman Was the Sun

The Autobiography of a Japanese Feminist

Raichō Hiratsuka. Translated, with an Introduction and Notes, by Teruko Craig 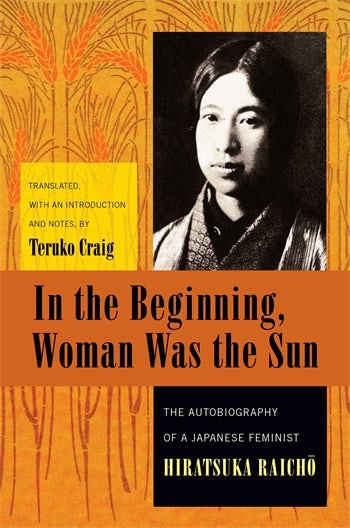 In the Beginning, Woman Was the Sun

The Autobiography of a Japanese Feminist

Raichō Hiratsuka. Translated, with an Introduction and Notes, by Teruko Craig

"In the beginning, woman was truly the sun. An authentic person. Now she is the moon, a wan and sickly moon, dependent on another, reflecting another's brilliance."-Hiratsuku Raicho

Raicho Hiratsuka (1886-1971) was the most influential figure in the early women's movement in Japan. In 1911, she founded Bluestocking (Seito), Japan's first literary journal run by women. In 1920, she founded the New Women's Association, Japan's first nationwide women's organization to campaign for female suffrage, and soon after World War II, the Japan Federation of Women's Organizations.

Available for the first time in English, In the Beginning, Woman Was the Sun is Raicho Hiratsuka's autobiography of her childhood, early youth, and subsequent rebellion against the strict social codes of the time. Hiratsuka came from an upper-middle class Tokyo family, and her restless quest for truth led her to read widely in philosophy and undertake Zen training at Japan Woman's College. After graduation, she gained brief notoriety for her affair with a married writer, but quickly established herself as a brilliant and articulate leader of feminist causes with the launch of the journal Seito. Her richly detailed account presents a woman who was at once idealistic and elitist, fearless and vain, and a perceptive observer of society.

Teruko Craig's translation captures Hiratsuka's strong personality and distinct voice. At a time when interest in Japanese feminism is growing in the West, there is no finer introduction to Japanese women's history than this intimate, candid, and compelling memoir.

This autobiography of Japan's foremost feminist presents a vivid portrait, rich in detail, of the education and everyday life for the daughter of a government bureaucrat growing up in Tokyo during the 1890s. Raicho Hiratsuka's transformation into an activist intellectual who, as the founding editor of the landmark journal Seito, recast the boundaries of feminist discourse deserves the widest possible readership in Japanese studies. Teruko Craig's admirably smooth and fluid translation is a pleasure to read and a major contribution to our field. Joan E. Ericson, associate professor of Japanese, Colorado College, and author of Be a Woman: Hayashi Fumiko and Modern Japanese Women's Literature

Everyone interested in Japanese feminism owes Craig an immense debt of gratitude for choosing to undertake this translation, and for doing it so well... Essential. Choice

A significant contribution to Japanese Studies and to the study of feminist thought as a transnational phenomenon. Jan Bardsley, Pacific Affairs

An absorbing read for Asian specialists and for general readers. Kathleen S. Uno, The Journa of Asian Studies

Teruko Craig is senior lecturer emerita of Tufts University and an associate in research at the Reischauer Institute of Japanese studies, Harvard University.