Translators on Their Work and What It Means 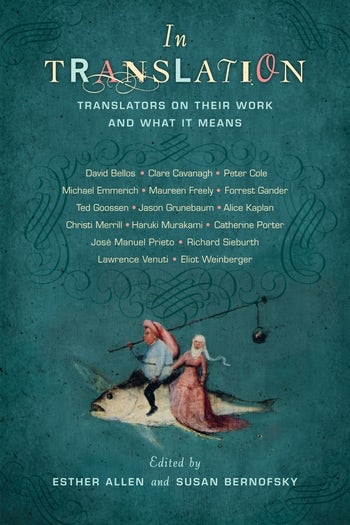 Translators on Their Work and What It Means

The most comprehensive collection of perspectives on translation to date, this anthology features essays by some of the world's most skillful writers and translators, including Haruki Murakami, Alice Kaplan, Peter Cole, Eliot Weinberger, Forrest Gander, Clare Cavanagh, David Bellos, and José Manuel Prieto. Discussing the process and possibilities of their art, they cast translation as a fine balance between scholarly and creative expression. The volume provides students and professionals with much-needed guidance on technique and style, while affirming for all readers the cultural, political, and aesthetic relevance of translation.

These essays focus on a diverse group of languages, including Japanese, Turkish, Arabic, and Hindi, as well as frequently encountered European languages, such as French, Spanish, Italian, German, Polish, and Russian. Contributors speak on craft, aesthetic choices, theoretical approaches, and the politics of global cultural exchange, touching on the concerns and challenges that currently affect translators working in an era of globalization. Responding to the growing popularity of translation programs, literature in translation, and the increasing need to cultivate versatile practitioners, this anthology serves as a definitive resource for those seeking a modern understanding of the craft.

In Translation promises to be an essential part of any translation library. Allen and Bernofsky have assembled a collection of thoughtful essays by a wide-ranging group of translators whose opinions about the knotty art of translation are varied, fascinating, and eminently intelligent Edith Grossman, Translator, author of Why Translation Matters

In Translation is an essential addition to the canon of translation studies, offering fascinating insights about the role and the work of the translator. Anyone interested in the making of literature will want this book. John Biguenet, coeditor of The Craft of Translation and Theories of Translation

Serious and witty by turns, and sometimes both at once, these informative essays illuminate what matters in translation and why translation matters. Motoyuki Shibata, University of Tokyo

A panoramic view of the craft of translation. An impressive gathering of the expertise of the finest translators working in English today from a wide range of languages and literatures. Peter Constantine, winner of the Helen and Kurt Wolff Translator's Prize for Benjamin Lebert's novel, The Bird Is a Raven

The essays in In Translation, exploring both the larger, complex questions of translation's role and function in the world of literature and the more detailed, word-by-word dilemmas faced by every translator, are consistently stimulating, engaging, and eye-opening, not to speak of eloquent and occasionally even dramatic and/or funny. I came away from reading them with a host of new ideas and insights. Lydia Davis, translator of Swann's Way and Madame Bovary

A strong introduction to the field. Publishers Weekly

Knowledgeable and articulate.... the book raises and clarifies a variety of significant issues about the many decisions translators must contend with. Kirkus Reviews

An obvious choice for writers and readers interested in translation; challenging but also accessible to the nonacademic reader. Library Journal

I loved this book. I felt I was introduced to a new universe, and not only translation, but language itself, will never look the same again. San Francisco Book Review

Translators, academics, students, editors, and publishers will want torecommend In Translation to anyone with a curiosity about who translators are,what translators do, how they do it, and why. Publishing Research Quarterly

Acknowledgments
Introduction: A Culture of Translation, by Esther Allen and Susan Bernofsky
Part I: The Translator in the World
1. Making Sense in Translation: Toward an Ethics of the Art, by Peter Cole
2. Anonymous Sources (On Translators and Translation), by Eliot Weinberger
3. Fictions of the Foreign: The Paradox of "Foreign-Soundingness", by David Bellos
4. Beyond, Between: Translation, Ghosts, Metaphors, by Michael Emmerich
5. Translation as Scholarship, by Catherine Porter
6. Translation: The Biography of an Artform, by Alice Kaplan
7. The Will to Translate: Four Episodes in a Local History of Global Cultural Exchange, by Esther Allen
Part II: The Translator at Work
8. The Great Leap: César and the Caesura, by Forrest Gander
9. Misreading Orhan Pamuk, by Maureen Freely
10. On Translating a Poem by Osip Mandelstam, by José Manuel Prieto, translated by Esther Allen
11. Are We the Folk in This Lok?: Translating in the Plural, by Christi A. Merrill
12. Choosing an English for Hindi, by Jason Grunebaum
13. As Translator, as Novelist: The Translator's Afterword, by Haruki Murakami, translated by Ted Goossen
14. Haruki Murakami and the Culture of Translation, by Ted Goossen
15. Translating Jacopone da Todi: Archaic Poetries and Modern Audiences, by Lawrence Venuti
16. "Ensemble discords": Translating the Music of Scève's Délie, by Richard Sieburth
17. Translation and the Art of Revision, by Susan Bernofsky
18. The Art of Losing: Polish Poetry and Translation, by Clare Cavanagh

Haruki Murakami on "Th... by Columbia University Press on Scribd

Esther Allen teaches at Baruch College, City University of New York. She has translated a number of books from French and Spanish, including the Penguin Classics anthology José Martí: Selected Writings. A former fellow at the Cullman Center for Scholars and Writers at the New York Public Library, she was named a Chevalier de l'Ordre des Arts et des Lettres by the French government for her work promoting a culture of translation in English.