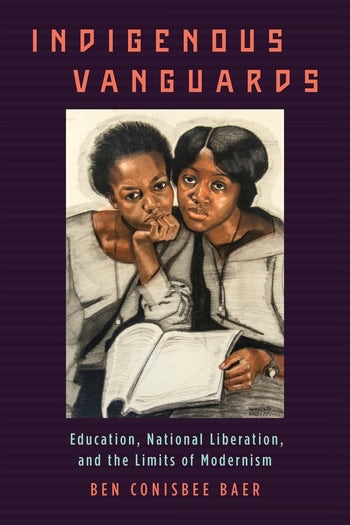 Anticolonial struggles of the interwar epoch were haunted by the question of how to construct an educational practice for all future citizens of postcolonial states. In what ways, vanguard intellectuals asked, would citizens from diverse subaltern situations be equally enabled to participate in a nonimperial society and world? In circumstances of cultural and social crisis imposed by colonialism, these vanguards sought to refashion modern structures and technologies of public education by actively relating them to residual indigenous collective forms.

In Indigenous Vanguards, Ben Conisbee Baer provides a theoretical and historical account of literary engagements with structures and representations of public teaching and learning by cultural vanguards in the colonial world from the 1920s to the 1940s. He shows how modernizing educative projects existed in complex tension with impulses to indigenize national liberation movements, and how this tension manifests as a central aspect of modernist literary practice. Offering new readings of figures such as Alain Locke, Léopold Senghor, Aimé Césaire, D. H. Lawrence, Rabindranath Tagore, Mahatma Gandhi, and Tarashankar Bandyopadhyay, Baer discloses the limits and openings of modernist representations as they attempt to reach below the fissures of class that produce them. Establishing unexpected connections between languages and regions, Indigenous Vanguards is the first study of modernism and colonialism that encompasses the decisive way public education transformed modernist aesthetics and vanguard politics.

In this brilliantly researched book, Ben Conisbee Baer shows us the diversity of the dream of subaltern education shared by global anticolonialism and antiracism. Its relationship to Marxism is given in historical detail. Through meticulous close readings, Indigenous Vanguards shows how the literary both represents and enacts these dreams. The readings of Césaire’s Cahier d’un retour au pays natal and Tarashankar Bandyopadhyay’s The Tale of Hansuli Turn are provocatively original. Gayatri Chakravorty Spivak, Columbia University

Nothing short of a disciplinary milestone for new genealogies, epistemologies, and cartographies of the comparative humanities, this impeccably researched and carefully argued literary history maps the configuration of postindependence self-determination movements worldwide. In scope and intellectual sensitivity, Indigenous Vanguards is a major contribution to postcolonial theory and the class stratifications of geomodernism. Emily Apter, New York University

Through a combination of the best of literary theory and an imaginative use of the archive, Baer provides brilliant insights into how anticolonial intellectuals inserted their political projects into what was supposed to be an autonomous aesthetic and, in the process, transformed the culture of the long twentieth century. Precise in its reading of cultural movements and texts, this book is a remarkable display of how a comparative approach makes modernism new again. Simon Gikandi, Princeton University