Sociographic Essays on the Post-Soviet Infrastructure for Alternative Healing Practices 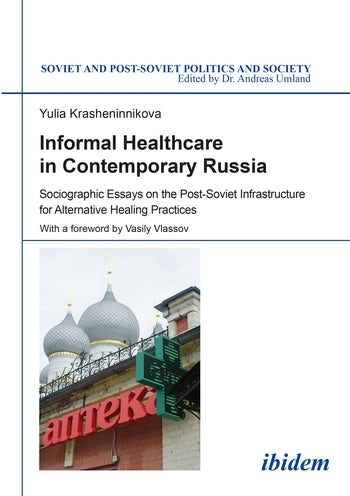 Sociographic Essays on the Post-Soviet Infrastructure for Alternative Healing Practices

This volume deals with one of the most understudied aspects of everyday life in Russian society. Its main characters are the providers of goods and services to whom people turn for healthcare instead of official medical institutions. This encompasses a wide range of actors—from network marketing companies to 'folk' journals on health as well as healers, complementary medicine specialists, and religious organizations.

Krasheninnikova's investigation pays particular attention to the legal, social, and economic status of informal healthcare providers. She demonstrates that these agents tend to flourish in bigger towns rather than in small settlements, where public healthcare is lacking. She also emphasizes the flexibility of boundaries between formal and informal healthcare due to the evolution of rules and regulations. The study reveals the important role of institutions that are generally not connected to alternative medicine, such as pharmacies, libraries, and church shops. This book is based on rich empirical observations and avoids both positive and critical assessment of the analyzed phenomena. The result is a vivid and thorough introduction to the world of self-medication and alternative healing in contemporary Russia.

As the author remarkably demonstrates, informal healthcare of the Russian province is a vast universe of people with their social institutions and networks that paradoxically combine rational approaches with irrational beliefs in miraculous cures. Alexander Nikulin, Director of the Center for Agrarian Studies, The Russian Presidential Academy of National Economy and Public Administration

The book provides conclusive evidence that the informal healthcare of provincial Russia, which successfully survives outside and between the market and the state, is one of the most flexible sectors of the informal economy and is extremely important for the majority of the Russian population. Teodor Shanin, President, The Moscow School of Social and Economic Sciences

I read the book with a degree of horror. It dispels the myth that alternative medicine is a substitute for the conventional one: where there is no conventional medicine, there is none at all. The book demonstrates yet again that traditional medicine is increasingly becoming business-focused rather than folk-based... Moreover, informal techniques penetrate the formal healthcare system and merge with it. At the same time, although many practices involving breathing exercises, leech therapy, massage, etc. are not evidence-based, even I have nothing against them. In general, the book draws attention to numerous issues and highlights a maze of concerns that have to be dealt with. Measures to be adopted must not be purely restrictive; rather, they should be scientific and educational, in particular, based on telemedicine technology. Pavel Vorobiev, Head of the Department of Hematology and Geriatrics, First Sechenov, Moscow State Medical University

Yulia Krasheninnikova is an expert at the Laboratory for Local Administration of the National Research University Higher School of Economics in Moscow and associate professor of public administration at the HSE Campus in Perm. She has published academic papers on health policy, professional medical communities, and alternative health practices in Russia.